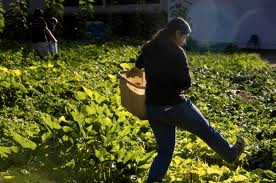 INDIANOLA — Organic farming anywhere can be unpredictable, so when the owners of Persephone Farm opened the family-owned business in Indianola, they made sure it could take whatever Northwest weather threw at them.

The farm has more than 50 different crops, with different varieties of the same foods. When one type of broccoli, for example, won’t grow, another can take its place.

“That’s why we’re so successful, because we grow 54 different crops,” said owner Rebecca Slattery. “Maybe one crop won’t love the summer, but the next variety might thrive.”

The farm makes sure to have plenty of food year-round, as owners Slattery and Louisa Brown practice succession planting. Succession planting helps ensure a farm or garden is creating a high yield of vegetables by growing one crop after another. The crops are put on planting schedules based around how long each vegetable produces and the best time of year for each crop.

The 13-acre, community supported agriculture farm offers shares to subscribers, which come in the form of produce boxes. There are also option shares for additional costs, including bread, cheese, eggs, fish, fruit, and more.

“We aim to provide 10-15 percent more value over the season than the cost of similar produce at other local outlets,” the farm’s statement reads.

The farm offers internships for interested agriculturalists looking to get on-the-job training. Lauren Stevens, an intern who grew up in upstate New York and attended Syracuse University, said her appreciation for agriculture has grown since she began working at Persephone Farms.

Stevens spent eight months in Phoenix, Ariz., where she began questioning where her food was coming from, as most was shipped in. At the end of her internship in Phoenix, she knew she wanted to start farming.

“I wanted to feel better about where my food is coming from,” Stevens said earlier in August. She wants to feel good about the food she is eating, because “it’s such a big part of our lives.”

By interning at the farm, Stevens has learned about farming techniques, which could help her avoid making mistakes in the future, potentially costing an unforeseen amount of money. For example, she wouldn’t have known to leave garden covers on carrots and other crops all year.

Stevens and the two other interns have also kept farm journals, keeping track of seeding and other critical data.

Though she’s not sure when or where it will be, Stevens knows she wants to start her own farm. There are options, including co-ops that share farming equipment, reducing costs.

“How I get from this point to that point, is still unknown,” she said. “We’ll cross that bridge when it comes.”

Where other farms focus on summer crops, such as tomatoes, Slattery said Persephone Farm specializes in crops that grow well the Northwest environment. The farm’s real speciality, she said, is greens. In fact, the farm is famous for its Wild and Fancy Salad Greens, a mix with about 60 different ingredients.

The owners of the farm try to steer away from greenhouse growing, especially growing vegetables out-of-season. The variety of gourmet vegetables is why restaurants are attracted to the business, Slattery said.

However, “We’re just as excited about tomatoes as everyone else,” she said.

The farm also offers flower arraignments, which are especially popular for weddings.

Popular produce seems to be based on what is highlighted on television and print publications, Slattery said. There are “crazes,” she said. Kale, for example, will be completely picked, whereas another crop could be almost untouched.

Persephone Farm first opened on Bainbridge Island, and had about 11 subscribers. Slattery, Brown and their husbands purchased the Persephone Farm property in Indianola in 2001. The 13 acres is split between the two families.

Persephone Farm and its owners were recognized June 8 by the Stillwaters Environmental Center with the 2013 EcoFest Sustainable Business of the Year Award. The award was given for the farmers’ “outstanding service to the Earth — by promoting and supporting our healthy eating habits, and by using organic, healthy farming practices to protect their ecosystems, and be being a strong supporter of our local community.”

Subscribers have increased as high as 60 since moving, Slattery said. It’s held at about 40 recently.