Sensitive Detection of PLRV in Potato Crop of Pakistan 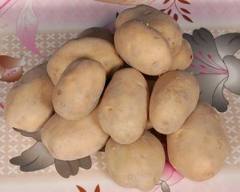 Sensitive Detection of PLRV in Potato Crop of Pakistan

Edible potato (Solanum tuberosum L.) is the world’s most widely grown tuber crop ranking fourth in production in the world after rice, wheat and maize and fifth in acreage among the staple food crops grown for human consumption. The main advantage of potato crop is that it has two compensations over the other crops i.e. its total production and calories per unit area are higher than wheat and rice. Potato also provides protein, carbohydrates and vitamins. Three consecutive potato crops (autumn, spring and summer) are grown in eight agro-ecological zone of Pakistan due to its favorable conditions.

Potato crop was grown on 127.7 thousand hectares and it produced 3726.5 thousand tons yield which is too much low as compare to other potato growing developing countries of the world. Fungus, bacteria, virus, nematode, different pests abiotic factors are much responsible in yield reduction. A large number of pest and pathogen and can be easily transferred to next generation through vegetative material. Introduction of new foreign and high yielding varieties without any check and balance and agronomic practices have certainly enhanced potato yield in Pakistan, but at the same time many new diseases were also emerged.

In Pakistan, reported Potato virus A (PVA), Potato virus S (PVS), Potato virus M PVM), Potato virus X (PVX), Potato virus Y (PVY), Potato leaf roll virus (PLRV) and Potato mop top virus (PMTV) are reported in autumn, spring and summer potato crop. Among the viral diseases, PLRV has caused significant yield losses in potato crop of Pakistan and produced rolling in the leaf of potato plants. A large number of potato samples were certified in plant diagnostic labs through Enzyme linked Immunosorbant Assay (ELISA) because these techniques are less expensive and more samples can be certified with in short period of time but ELISA is unable to detect low titer of virus at early stage of infection. The viron of PLRV (theoretically one) presented in ELISA negative samples will multiply into several billions copies within few days and dispersed to the healthy plant by mean of inset vector in non-persistent manner. It is one of the reasons that ELISA negative plants sometime show rolling of leaves at later stages of their growth.

The Polymerase Chain Reaction (PCR) assay is fast, reliable, cost effective and specific to detect the PLRV and these techniques are using only scientific laborites of the county. New applications of PCR are being published at an increasing rate and it is evident that it will be used in may field of basic and applied research. For RNA viruses, reverse transcriptase (RT) PCR techniques were adopted and these techniques unable the researcher to detect PLRV using sap from dormant potato tubers.

RT-PCR is also capable to confirm PLRV at initial stage of infection where ELISA is unable to detect the virus due to low titer. The nucleotide evidence of coat protein gene of PLRV from Pakistani isolate has reported in the data bank of National Center for Biotechnological Information (NCBI) from a Pakistani isolates and complete genome sequence is necessary for further studies. The application of sensitive techniques (PCR) for the detection of PLRV in plant diagnostic laborites of Pakistan will play a pivotal role to detect the virus in dormant potato and it will reduce the dispersal of PLRV as an initial source of infection. The high yield of potato crop will increase grower’s income and Gross Domestic Product (GDP) of the country.