Pakistan is producing a limited quantity of strawberries which are either eaten or used in preparing ice-cream, jam, jelly, pickle, cake or milk shake. The fruit fetches Rs100 to Rs120 per kg in big cities. 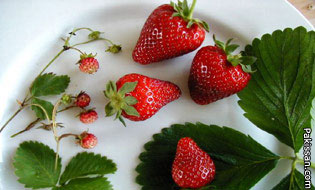 The wholesale price of the fruit comes down to Rs 50 per kg during the second fortnight of March when the crop production touches its peak. The per acre income from strawberry crop is estimated to Rs100,000 per season.

There are a number of reasons for restricted production, like the climate, size and taste. By overcoming problems related to quality, quantity and perishability of the fruit, Pakistan can also export it to Europe, the United States and Middle Eastern countries. Its saplings can be obtained from nurseries located in Mingora and Madayen (NWFP) at a rate of ReI per unit.

There is no one variety of strawberry which possesses all the desirable characteristics. Some are superior to others only because of certain characteristics. In general, the differences in tastes between different varieties are not given as much weight as in case of some other fruits. Some of its superior varieties enjoy colour that is very attractive. Its varieties grown in Pakistan are Chandelier, Corona and Stuff. These are mostly sour and small in size.

Planting:
Ordinarily, strawberries are propagated from runner plants grown by large commercial growers. The sale of runner plants is frequently a sideline business which supplements 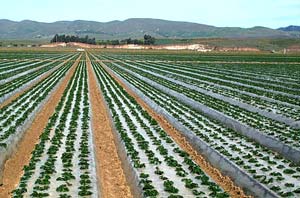 the main income from the fruit. The best strawberry transplants are less than a year old.

A good transplant should have an extensive fibrous root system, seven or eight inches in length. This type of root system usually develops best in rather loose sandy soil. Such soil also facilitates digging the plants and cleaning the roots for packaging.

Timings:
Early spring is an ideal time for planting as it ensures good development for increased productivity the following season. Fall planting is not recommended due to greater problems with weed control and the cost of winter mulch. The number of plants needed per acre depends upon the spacing system used. 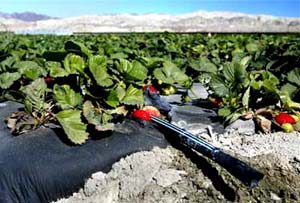 The main planting system used for strawberry cultivars is the matted row. Set the plants 11/2 to 21/2 feet apart in rows spaced 3 to 4 feet apart. Let the runners develop until the row is I to 11/2 feet wide.

Inter-cropping:
Fruit growers often find it economically beneficial to grow strawberries between the rows of young fruit trees until they become of bearing age. Such intercropping is well justified so long as the strawberries do not interfere with the culture of the tree fruits, which represent a much greater investment.

Usually it is not wise to plant strawberries closer than six to eight feet to tree fruits. Otherwise they are likely to interfere with cultural operations for the trees and may compete for water and nutrient materials in the soil. Often the trees suffer more than the strawberries.

Mulching:
Mulching is necessary in June bearing varieties to protect flower buds from temperatures below 15′ F and to protect crowns from heaving damage. A three- to five-inch layer of straw mulch be applied after a few hard frosts, usually in late October or early November.

Irrigation:
Sprinkler irrigation is crucial to prevent frost damage in June bearing varieties after the mulch is removed in early spring. Irrigate whenever the air temperature drops below 34′ F. Apply 0. 1 inch of water per hour 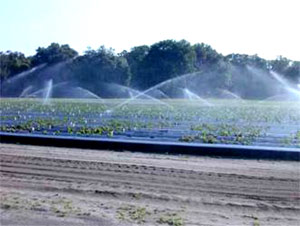 with one sprinkler head revolution per minute.

Sprinkler irrigation should protect flowers and developing fruit down to 20′ F. Spring frost protection is unnecessary during the planting year in day-neutral strawberries because the flowers are usually removed until the danger of frost is past. Frost protection may, however, be desired in the fall to extend the harvest season.

Day-neutral strawberries require more careful irrigation and water management than June-bearing strawberries, especially on raised beds. During the summer apply 0.75 to 1.5 inches of water per week depending on the weather, soil type, and effectiveness of mulch in preventing evaporation.

Fertilizers:
Nitrogen, phosphorus, potassium, and other soil nutrients are required for vigorous crown and runner development. Soil tests will identify the nutrient needs. Generally phosphorus, potassium, and part of the nitrogen should be applied at or before planting. On most soils and under most conditions strawberry plants will be benefited by the application of commercial fertilizers, particularly by nitrogen, during the first growing season.

Weed control:
A weed eradication programme one year prior to planting is recommended if perennial weeds are a problem. Herbicides, mechanical control methods, and a green manure smother crop can be used effectively. Consult herbicide labels to avoid potential carry-over problems for the new strawberry planting. Preplan harrowing of a prepared field will reduce weed populations.

Insect control:
Not all insects found in a strawberry patch injure the plants and many of those that do can be controlled by preventive measures more easily than by chemicals. Rotation of strawberries with other cultivated crops is useful in controlling insects. 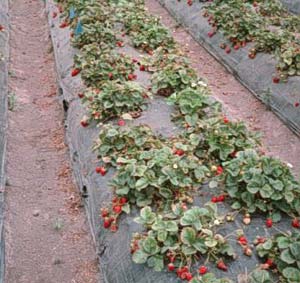 Proper picking, grading, and packing are as essential as good cultural practices to success. The harvest frequency and duration depend on weather conditions, varieties, soil factors, and cultural practices. Strawberries are almost entirely hand picked. As a general rule for wholesale operations, six to nine pickers are needed for one acre.