RICE an important food crop and one of the main export items accounts for 6.1 per cent of the value-added in agriculture and 1.3 per cent to the GDP. The country in respect to area under rice (paddy) ranks 10th in the world and 14th for yield per ha. The yield gap and world ranking suggests poor rice production system which needs immediate attention of the policy makers. 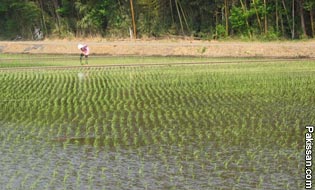 About 96 per cent basmati rice is grown in the Punjab as environment over there is suitable in maintaining the quality and aroma of basmati rice. Although, its yield is much lower than Irri but the demand is high in the national and international markets. Most of the farmers prefer to grow basmati rice despite low yield, high production cost and intense water requirement.

One kilogram rice is produced with about 25,000 litres of water while in China and India five and two kg of rice is produced respectively with the same quantity of water. The cost of rice planting and irrigation efficiency could be improved by following improved planting system.

The traditional rice planting system comprises puddling method that requires 10 to 20cm of standing water throughout its growing season resulting in higher water use than actually required. The problem of labour and expenditure has been aggravated due to the industrialization and urbanization. Lower plant population is also one of the main constraints in obtaining high yield under conventional planting.

However, a number of planting systems such as parachute rice transplanting technique, the SRI-method, the Chinese technologies, planting rice under plastic film cover, double cropping, hybrid planting, the Chinese rice transplanter, and directing seeding are other alternate systems which reduce cultivation cost, labour and water needs of the crop.

The Directorate of Agriculture, On Farm Water Management, Punjab in collaboration with the Pakistan Agricultural Research Council introduced the Chinese Parachute Rice transplanting technology in 2000 which takes 20-25 days to attain the seedling height of about 20cm as against 30-40 days. Plastic trays with 1.25cm deep plugs are used for raising the nursery.

About 2-3 healthy seeds are put in each plug of the tray followed by covering with sieved soil. A solo spray machine is used for throwing seedlings in such a way that proper quantity of soil surrounds the roots of each seedling in the form of a ball. Thus, parachute technology not only saves land and labour but also promotes early tillering.

The Directorate in collaboration with the University of Agriculture Faisalabad initiated the SRI technology. Initially farmers were not convinced but after witnessing the superiority of standing crop their confidence grew significantly. This technology increases production and raises the productivity of land, labour, water and capital.

Plants grown in close contact with weeds have to compete with weeds for nutrients, water and sunlight. In this technique seedlings are spaced by maintaining the plant to plant distance 20, 25, 30, and 40cm preferably in square pattern giving more access to sunlight and air above the ground.

China produces double cropping of rice using short duration and high yielding varieties. Pakistan should also study economic potentials of taking two crops of rice in regions with longer growing season. China is also growing high yielding and environment-resistant hybrid rice and has introduced five such varieties in Sindh. Minfal should collect information about its performance and study the potential of their cultivation in other provinces, as well.

China grows rice seedlings under plastic film covers which helps sowing and transplanting of seedlings to evade the attack of cold waves and low temperature in early spring in colder regions. Pakistan should also study the potential of this technology in Azad Kashmir, the NWFP, the Northern areas and parts of Balochistan having cold waves and low temperatures in spring.

The Chinese trasnsplanter helps in transplanting seedlings mechanically on large area in short time thus saving the cost of labour, besides planting the crop earlier providing it longer growing period. Pakistan should take into account its potentials.

China uses Azolla and the Indian Punjab Dhaincha as green manure crops which improve organic matter in the soil and physical conditions. It not only increases the yield of rice but of the following wheat crop as well. Rice is transplanted immediately after burying green manure crops to avoid delay in sowing.

The decreasing water resources and increasing labour cost may force farmers to adopt alternate ways. Direct seeding of germinated or ungerminated seeds is one of the options. It is getting popular because of economic benefits.

The Directorate of On-Farm Water Management, Punjab has adopted conservation approach rather than conventional by developing zero tillage technology, furrow–bed planting, parachute and now KRL-rice transplanting techniques. It should also study the potential of various rice planting techniques as stated earlier. Besides other advantages these techniques may also help in saving water.