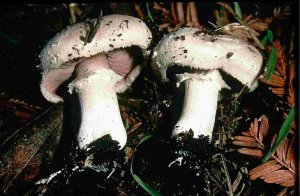 Agaricus bisporus is a terricolous secondary decomposer fungus, which plays an ecologically significant role in the degradation of leaf and needle litter in temperate forests. Soils contain humic compounds derived from modified lignin and other recalcitrant aromatic compounds, presenting a different catabolic challenge to intact woody resources. Thus, A. bisporus forms an important model for carbon sequestration studies to understand the persistence of mycelial material in humus and to determine the role of fungi in bioconversion of plant materials to humic acids. The homobasidiomycete species is arguably the most well studied member of the family Agaricaceae; a large, diverse and economically important group of fungi. Comprehending the carbon cycling role of the Agaricaceae in forests and other ecosystems is a prerequisite to model and optimise carbon management.

Agaricus genome sequence will provide new opportunities to compare the role of a secondary decomposer in various environmental and developmental fungal processes with other basidiomycete and ascomycetes. Comparisons with the sequenced Polyporales (Postia placenta -brown rot, and P. chrysosporium -white rot) and the mycorrhizal basidiomycetes will provide insight into transitions between different ecological modes (e.g. decomposer, mycorrhizal, white- and brown-rot fungi).

Fortunately, as the premier cultivated mushroom species, a substantial scientific knowledge base exists for A. bisporus, which forms a solid foundation from which launch comparative analyses of basidiomycota genome sequences. Physiology, metabolism, and development have all been investigated at the molecular level, including: substrate utilization, reproductive development, senescence and morphogenesis expression profiles, control of offspring ploidy at the meiosporangium level, and mechanisms of resistance to bacterial and fungal diseases.

Significantly, several Agaricus species have potential for bioremediation of substrates contaminated with heavy metals, and these decomposer fungi are more able to hyperaccumulate toxic metals than some mycorrhizal fungi. Full potential of this area will require more extensive research and all these areas will be expedited by availability of genome sequence.