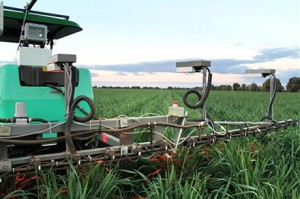 “It can navigate around a 4000 hectare wheat farm using low-cost sensors, targeting weeds with spray while they are still very young plants,” Professor Wyeth said.

“Currently farmers have to use their tractors to weed, but because fields are naturally wet and boggy after rain it can take some time before the tractor can be brought in.

“This means the weeds are taller and require more spray to be eradicated.

“With AgBot, weeding can happen instantly, which means less spray will be used. This is better for the environment and better for the farmer’s budget.

“We estimate that robots would save the wheat industry alone $620 million per year just in relation to weeding.”

“Robots will be able to tell farmers how ripe their crop is, for example, and this will be of great assistance during planning of the harvest,” he said.

“Because information on the state of all aspects of the crop is being provided to the farmer, they will be able to send their robots to those parts of the farm that need the most attention.”

“We can easily envisage that within the next decade robots will play a vital role in the day-to-day operation of farms across Australia.”