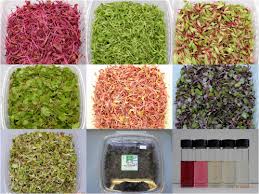 Feeling a bit under the weather? Need a little pep in your step? A sprinkling of microgreens on your salad or soup might be just what you need.

Researchers with the University of Maryland College of Agriculture and Natural Resources (AGNR) and the United States Department of Agriculture (USDA) recently completed a study to determine the level of nutrients in microgreens compared to their mature counterparts.

What are microgreens exactly? They are tiny, immature versions of vegetables, herbs and other plants harvested anywhere from a week to two weeks after germination that tend to be about one to two inches long with the stem and leaves still attached. Microgreens are typically only seen in fine dining restaurants, used as delicately placed garnishes or for a pop of unique flavor.

Assistant professor Qin Wang and graduate student Zhenlei Xiao with the College of AGNR’sDepartment of Nutrition and Food Science (NFSC) participated in the study, which looked at nutrients like Vitamin C, E, K and beta carotene found in 25 different types of microgreens including cilantro, celery, red cabbage, green basil and arugula.

Their research ultimately discovered that the microgreens contained four to 40 times more nutrients than their mature counterparts.

“We were really surprised,” Wang said of the findings, which were published in the Journal of Agricultural and Food Chemistry. “Those nutrients are very important to us. Vitamin C is considered an antioxidant, as well as Vitamin E, so they’re very important for us to consume.” 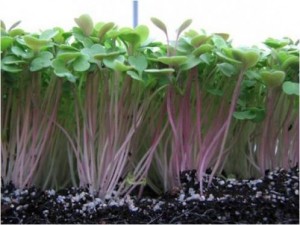 “Some of the numbers were really, really high,” said Xiao. “We thought it might have been a mistake but we double-checked so many times and there were no mistakes.”

It has long been speculated that microgreens packed a potent punch of antioxidants but until now, no research existed to support the theory. “There’s just no evidence,” said Wang. “That’s what motivates us to do this kind of research.”

Because microgreens are so delicate, they are not recommended for cooking and should be eaten raw with minor washing, says Wang. As a result, they only have a shelf life of two to five days and are difficult for the average consumer to come by.

“Production is low right now and the cost is high so they are really only used in upscale restaurants. They are really not available in the grocery store,” said Wang.

Wang, Xiao and USDA researchers also looked at ways to possibly increase production and lower the cost of microgreens by examining the effects of different temperatures, packaging techniques and washing conditions. The research team is currently testing how the tiny greens respond to various light exposures. 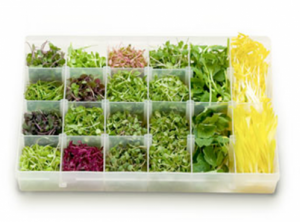 But before you dash out for a mega-dose of microgreens, Wang says more research needs to be done on different varieties of the tender veggies, of which there are many, as well as updated comparative research on their mature counterparts. While Xiao taste-tested all of the microgreens in the study and found most of them to be quite flavorful, particularly the young purple radish, she advises consumers to use moderation. “I would say adding it to your sandwich, soup or salad, it definitely will taste better than if you eat it alone,” Xiao said. “They are really good food enhancers.”