Agribusiness Is Forcing Factory Dairy Farms Down Our Throats 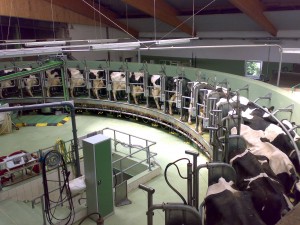 Agribusiness Is Forcing Factory Dairy Farms Down Our Throats

The current move to drive milk prices down in the UK is sinister. If allowed to continued, dairy farmers will go out of business, leaving a vacuum that can only be filled with CAFOs.

Concentrated Animal Feed Operations – CAFOs – are one of Agribusiness’s greatest evils. In the dairy industry, they are designed to produce the greatest volume of milk for the lowest price. The real cost—in terms of animal suffering, creation of new diseases, environmental destruction, and milk that’s bad tasting and destructive to human health—isn’t factored into the equation. Agribusiness doesn’t pay those costs. But we do.

Those places that have been holding out against CAFOs are now being put under even more pressure. In the UK, the farmers who produce the vast bulk of milk sold in supermarkets are being driven towards CAFOs. Their milk isn’t the quality it should be, as it’s denatured through pasteurization, But it’s still a step above CAFOs. These farmers have suddenly and arbitrarily been informed that they must drop their wholesale milk prices by a whopping 16⅔%—from 30 pence to 25 pence per liter. It’s a figure so low that they cannot stay in business.

In this age of increasing prices, supermarkets are trying to force farmers to accept less than it costs to produce milk!

The UK Has Held the Line Against Dairy CAFOs.

At this point in the UK, there are no dairy CAFOs. One company has attempted to start a dairy CAFO, but community resistance, coupled with widespread concern, has managed to prevent their two attempts. Clearly, the citizens of England don’t want CAFOs. However, Agribusiness does. So, Agribusiness has taken a new approach. They intend to make it impossible run a dairy farm at a profit.

The industry is complex, with middlemen who buy directly from the farmers and sell to the supermarkets, making it difficult to point fingers. However, the simple fact is that virtually the entire supermarket industry in the UK decided all at once that they were going to lower the price they pay for milk from 30 pence to 25 pence.

Rather than go into the details, let’s just focus on the fact that it costs dairy farmers between 29 and 30 pence per liter to produce milk. That gives them no margin. They can survive for a time on that rate, but it leaves virtually no profit and absolutely no margin for problems or reinvestment for the future of the business. In other words, getting paid 29-30 pence results in, at best, a slow death for dairy farms.