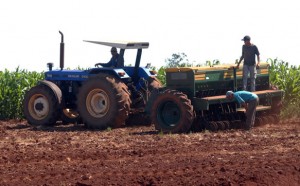 AS economies industrialise, the relative importance of farm production declines and that of processing and distribution increases, with a marked shift towards agribusiness.

The policy stance of many developing countries tilts in favour of agribusiness from a more specific focus on agriculture while a large section of the population still depends on agriculture for its livelihood.

Agribusiness firms reportedly try to manipulate demand-supply for their benefit. Agribusiness firms, because of their capital and clout, influence formulation of trade rules and procedures.

The root of the problem is that large and influential corporate houses, whose main motive is generating profits and not feeding people, run the current agriculture business. Over the past decades, fewer and fewer firms have been controlling more and more of the global food market. Three or four firms control most of the international trade of each product, both on the export and import sides.

The agriculture market today is characterised by both horizontal and vertical concentrations which give the agribusiness firms a lot of power to influence prices, both paid to producers as well as charged from consumers. Vertical integration helps firms control not just one aspect of food production but the entire process. This entails not just selling seeds, fertiliser and pesticides but also the purchase of crops from producers, their processing, and onward sale to retailers.

Other problems in the agribusiness include:

• Loss of bargaining power: Farmers are inherently disadvantaged in the market due to their large numbers compared with fewer processors. They therefore lose out on price. Concentrated market is an important reason for the erosion of farm income. Agribusiness pulls profits of farmers downstream and increases the profits of agribusiness firms.

• Farmers lose flexibility in enterprise choice. Bound to a crop or livestock enterprise by a contract, farmers cannot adjust their production mix so as to benefit from opportunities; hence there is loss of income for family farms.

• Agriculture dumping: Agriculture dumping is a process in which one agricultural company in a country exports its product to another country at a price lower than the cost of production. This is done so that they are able to drive down prices to be paid to farmers.

• Agriculture dumping creates an unfair trading advantage for exporting agribusiness firms by depressing international prices and narrowing or even eliminating market opportunities for producers in other countries.

• Environment erosion: There is a lot of soil and water contamination due to increased dependence on pesticides and other chemicals, soil erosion due to production of only one crop, and loss of biodiversity.

Developing countries have been witnessing changes in lifestyle and spending. With increased urbanisation there is increased dependence of food retailers and manufacturers on specialised procurement channels and dedicated wholesalers have set new standards for food quality and safety.

Food is increasingly being sold to formal sector retail outlets such as supermarkets, rather than grown for sale at local markets. Private sector participation in developing countries is being intensively promoted to allow accelerated technology transfer, capital inflow and an assured market for crop production.

Changes in agri-food systems have significant implications for growth, poverty and food security. On the positive side, agribusiness is responding to strong consumer demand for high-value commodities, processed products and pre-prepared foods. At the same time, expanding markets offer farmers opportunities for new value-addition, compared with primary production, while exporters and agro-processing enterprises furnish crucial inputs and services to the farm sector.

However, on the negative side, rapid development could displace small farmers, processors, stores and traders who depend on traditional marketing and distribution channels at a pace that does not allow them enough time to create alternative opportunities.

Small-scale farmers, who are faced with increasingly strict agro-industry standards, face all the risks. So also do small-scale traders, processors, wholesale markets and retailers who are forced to compete with large goods suppliers and manufacturers. Less intervention by the State and increased concentration of corporate entities lessen competition and the fair market framework for trade in agriculture.

Global corporations now control one-third of the world’s productive assets and three-quarters of all world trade.

Agribusiness firms have matured steadily over the last several decades, with the result that small processors and small agricultural producers have become a shrinking part of the landscape. The increased consolidation of agribusiness firms in the food industry has led to a more imperfect market.

Farmers are at a disadvantage because they are numerous, while processors are few. They turn up as price-takers with invariably no bargaining power. Firms wielding immense market power squeeze farmers from both sides. The market power of retailers, processors and grain companies dominates the agri-food chain and takes a larger and increasing portion of the producer’s surplus, making windfall gains. They win both ways — when prices fall as well as when they peak.

On the other hand, farmers always bear the brunt, losing out during times of bumper production as well as low yields.

The following methods could be used to regulate the unfair practices of agribusiness firms:

• Introduce fairness in trade: All transactions should be done in a fair and transparent manner wherein farmers are made aware of the prevailing market price and receive a fair margin of the market share.

• Strengthen cooperatives: Most developing countries have a large number of small farms and a collective mechanism of marketing and delivery of input through the cooperative movement. This goes a long way in providing a congenial atmosphere and mitigating the risks of marketing.

• Public scrutiny of mergers and acquisitions: Most cartels exist on account of lack of effective regulation mechanisms and an absence of competition policies.

• Strict auditing of food and trade flows: On account of lopsided trade rules and a restricted State intervention in the marketplace, the role of transnational and multinational corporations is set to increase in the production and trade of food articles in developing countries. To regulate speculation, cartelisation and malpractice, strict auditing of food balances and trade flows needs to be carried out. Only such strong action will help check speculation as well as exploitation of natural resources.

The increasing expansion and control of big business in agriculture and food systems have given rise to increasing concern, even alarm, about the adverse impact on livelihoods of farmers, labour markets in general and women workers in particular, sustainable production of food, quality of food, health and nutrition, environment and welfare of other forms of life.

Agribusiness should be carefully analysed and monitored for its impact on sustainable rural livelihoods to bring about necessary correction.