Agriculture in Israel is a highly developed industry: Israel is a major exporter of fresh produce and a world-leader in agricultural technologies despite the fact that the geography of Israel is not naturally conducive to agriculture. More than half of the land area is desert, and the climate and lack of water resources do not favor farming. Only 20% of the land area is naturally arable.[1][citation needed]Today agriculture represents 2.5% of total GDP and 3.6% of exports.[2][citation needed]While agricultural workers make up only 3.7% of the work force, Israel produces 95% of its own food requirements, supplementing this with imports of grain, oilseeds, meat, coffee, cocoa and sugar.

Israel is home to two unique types of agricultural communities, the kibbutz andmoshav, which developed as Jews from all over the world immigrated to the country and embarked on a pioneering enterprise

Citrus packing in Hadera before the establishment of the state

Water shortage is a major problem. Rain falls between September and April, with an uneven distribution across the country, from 28 inches (70 cm) in the north to less than 1 inch (2 cm) in the south.[2][citation needed] Annual renewable water resources are about 5.6 billion cubic feet (160,000,000 m3), of which 75% of which is used for agriculture.[2][citation needed] Most of Israel’s freshwater sources have been consequently joined to the National Water Carrier, network of pumping stations, reservoirs, canals and pipelines which transfers water from the north to the south.[2][citation needed] 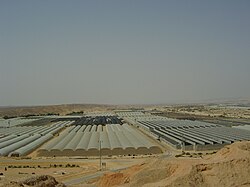 Most of Israel’s agriculture is based on cooperative principles that evolved in the early twentieth century.[2] Two unique forms of agricultural settlements; the kibbutz, a collective community in which the means of production are communally owned and each member’s work benefits all; and the moshav, a farming village where each family maintains its own household and works its own land, while purchasing and marketing are conducted co-operatively.[2] Both communities provided a means not only to realise the dream of the pioneers to have rural communities based on social equality, co-operation and mutual aid but also to gain agricultural output in a productive means.[2] Today, between kibbutzim and moshavim, 76% of the country’s fresh produce is output, as well as many processed food products.[2] 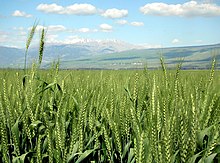 Wheat growing in the Hula Valley

Due to the diversity of the land and climate across the country, Israel is able to grow a wide range of crops. Field crops grown in the country include wheat, sorghum and corn. On 215,000 hectares of land, these sorts of crops are grown, 156,000 hectares of which are winter crops.[6]

Fruit and vegetables grown include citrus, avocados, kiwifruit, guavas and mangoes grapesfrom orchards located on the Mediterranean coastal plain.[2] Tomatoes, cucumbers, peppersand zucchini are grown commonly throughout the country, whilst melons are grown during winters months in the valleys.[2] Subtropical areas in the country produce bananas anddates, whilst in the northern hills apples, pears and cherries are grown.[2] Furthermore, grapevineyards are found across the country, as the country’s wine industry has developed to become a world-player.[2]

In 1997, $107 million worth of cotton was grown in Israel with most of this sold in advance on the futures market. The crop is grown on 28,570 hectares of land, all of which is drip irrigated. 5.5 tons per hectare of raw cotton is averaged for the Acala crop whilst the Pimacrop averages 5 tons per hectare, which are yields amongst the highest in the world.[6]

All of the Israel’s milk consumption originates from dairy farms within the country with most herds consisting largely of Israel-Holsteins, a high-yielding, disease-resistant breed. Furthermore, sheep milk is exported. In terms of poultry which makes up two thirds of meat consumption, 85% originate from moshavim.[2]

The Mediterranean Sea is a source of salt-water fishing whilst freshwater fishing occurs onLake Kinneret (the Sea of Galilee). Pioneering technology is being used to breed fish in artificial lakes in the Negev desert.[2]Scientists of the Bengis Center for Desert Aquaculture at Ben-Gurion University of the Negev discovered that the brackish water under the desert can be used for agriculture, aquaculture and a combination of the two. This has led to the farming of fish, shrimp and crustaceans in the Negev.[8]

Commercial fishing in the eastern Mediterranean has declined significantly due to depletion of fish reserves and the supply of fresh fish in Israel depends almost entirely on aquaculture. Fish from the Sea of Galilee include silver carp, grass carp, grey mullet, St. Peter’s fish,rock bass, silver perch, and Asian seabass introduced from Australia. Fish grown in cages submerged in the sea include gilthead seabream (called denis in Israel), European sea bassand a South American variety of meager. Trout and salmon are raised in special canal-like ponds of running water of the Dan River, a tributary of the Jordan River.[9]

Israel is one of the world’s leading fresh citrus producers and exporters,[10] including oranges, grapefruit, tangerines and the pomelit, a hybrid of a grapefruit and a pomelo, developed in Israel.[11]

More than forty types of fruit are grown in Israel. In addition to citrus, these include avocados, bananas, apples, cherries, plums,nectarines, grapes, dates, strawberries, prickly pear (tzabbar), persimmon, loquat (shesek) and pomegranates.[12] Israel is the leading producer of loquat (shesek) after Japan.[13]

In 1973, two Israeli scientists, Haim Rabinowitch and Nachum Kedar, developed a variety of tomato with slower ripening than ordinary tomatoes in a hot climate.[14]Their research led to the development of the world’s first long shelf-life commercial tomato varieties.[15]This discovery transformed agricultural economics in Israel, promoting the export of the vegetables seeds and the move to high-tech farming.[16] It also had a global impact, enabling large-scale production through the prevention of spoilage. Previously, farmers were forced to discard 40 percent of their produce.[16]

Israel produces vast quantities of flowers for export. Flower exports in 2000 exceeded $50 million.[18] The flowers grown most commonly are Chamelaucium (waxflower), followed by roses, which are grown on 214 hectares of land.[18] In addition to flowers favored in the West such as lilies, roses and tulips, Israel exports desert varieties. It has become a major player in the global floral industry, especially as a supplier of traditional European flowers during the winter months.[19]

Aquaculture in Kibbutz Ketura (kibbutz) in the Negev Desert

Israel is a world leader in agricultural research and development which have led to dramatic increases in the quantity and quality of the country’s crops. The drive to increase yields and crop quality has led to the development of new seed and plant varieties, as well as to innovations such as a soil conditioner substance (vermiculite) which, when mixed with local soils, boosts crop yields, and drip irrigation.[2]

Farm surpluses have been almost eradicated in the country with farms having production and water quotas for each crop which have stabilised prices.[2] Production quotas apply to milk, eggs, poultry and potatoes.[2] Israel’s government also encourages a reduction in agricultural costs by trying to encourage specialised farming, and halting of production of crops for which no sufficiently profitable markets exist.[2] The Ministry of Agriculture oversees the country’s agricultural sector, including maintenance of standards of plant and animal health, agricultural planning, and research and marketing.[