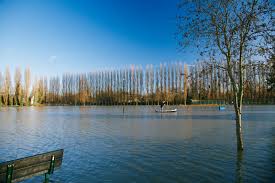 The prolonged heat wave that has bathed the UK in sunshine over the past month has given the country an unexpected taste of summer that has seemed to be missing in recent years. However, a new study published today, 24 July, in IOP Publishing’s Environmental Research Letters, has provided warnings that will chime with those accustomed to more typical British weather.According to the study, winter flooding in the UK is set to get more severe and more frequent under the influence of climate change as a result of a change in the characteristics of atmospheric rivers (ARs).

ARs are narrow regions of intense moisture flows in the lower troposphere of the atmosphere that deliver sustained and heavy rainfall to mid-latitude regions such as the UK. They are responsible for many of the largest winter floods in the mid-latitudes and can carry extremely large amounts of water: the AR responsible for flooding in the northwest of the UK in 2009 transported 4500 times more water than the average flow in the River Thames in London.

The researchers, from the University of Reading and University of Iowa, found that large parts of the projected changes in AR frequency and intensity would be down to thermodynamic changes in the atmosphere, rather than the natural variability of the climate, suggesting that it is a response to anthropogenic climate change. To reach these conclusions, the researchers used simulations from five state-of-the-art climate models to investigate how the characteristics of ARs may change under future climate change scenarios. Firstly, they used the climate models to see how accurately they could simulate the ARs that occurred between 1980 and 2005.

The five models did this successfully and were deemed capable of projecting how future ARs will develop under different scenarios. The models were then used to simulate future conditions under two scenarios – RCP4.5 and RCP8.5 – that represent different, yet equally plausible, scenarios for future increases in greenhouse gas concentrations in the atmosphere. They projected changes that would occur between 2074 and 2099. Each of the five models simulated an increase in AR frequency.

For the RCP8.5 projections, which represents stronger increases in greenhouse gas concentrations than RCP4.5, there was a striking level of consistency in the magnitude of change in AR frequency – all models showed an approximate doubling of the number of future ARs compared to the simulations for 1980 – 2005. The models also projected an increase in intensity of the ARs, meaning an AR impacting the UK in the future is projected to deliver more moisture, potentially causing larger precipitation totals. Lead author of the research, Dr David Lavers, said: “ARs could become stronger in terms of their moisture transport.