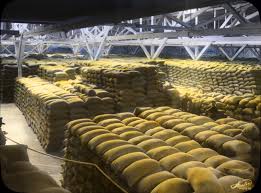 “[Federal food and agriculture minister] Nazar Muhammad Gondal said that last year the growers were given slogan of ‘Grow more wheat’ while this year they have been given the slogan of ‘Produce more wheat.’”

“Increasing the quantum of water and food is pointless so long as they continue to be squandered by poor resource management.” —Michael Kugelman, Dawn, 2011

Southern Punjab: The Ministry of Food and Agriculture unveiled a major new initiative today along the banks of the Sutlej River. Known as the Benazir Bhutto Big Sack of Wheat Support Program (BBBSWSP), it vows to bring food security to tens of thousands of hungry Pakistanis.

The program involves the depositing of an enormous sack of wheat — estimated at several kilometers long and high — atop the Sutlej for public consumption. According to a ministry official who briefed the media onsite, the sack provides “a ready-made and ample source of food for our needy masses.”

As he spoke, several employees of a wealthy local landowner, all sporting “It’s futile not to be feudal” T-shirts, shoved him aside, sprinted over to the sack, sliced open a gaping hole, emptied several tons of wheat into three large burlap bags, and made off with their cache of grains.

Additionally, the official continued, because the sack’s position blocks the flow of the Sutlej, the resulting dam generates water storage. “With the BBBSWSP’s simultaneous creation of food and water resources,” he explained, “we demonstrate the true essence of integrated resource management.”

His last few words were drowned out by the anguished cries of some smallholders downstream, who had just discovered that their modest plots now lay underwater.

Ministry officials shepherded reporters around the project site, taking care not to collide with foreign contractors and local NGO workers hastily preparing for the holding of a training seminar entitled “Building Capacity for Getting Wheat Out of the Sack and Achieving Food Security Bliss.” Once closer to the sack, it became apparent that wheat was pouring out of the freshly carved hole. Meanwhile, the lower perimeter of the sack was waterlogged, its contents completely soaked through.

Droves of people began arriving, and a pattern soon emerged. A small group of grain-seekers, most of them charges of local sugar barons and textile owners, brandished sturdy ladders and large axes. They ascended to the top of the sack, far above water level, and methodically extracted high-quality grains. Meanwhile, down below, masses of people struggled to penetrate the increasingly wet sack; some gave up without accessing any of its contents, while the lucky ones managed to snare a few bushels of wet wheat.

“There is no problem here,” the ministry official said in response to a reporter’s question about people’s struggles to secure wheat. “Leakage and access issues are inevitable. That is why we have produced such a large sack, to ensure that there will be enough supply after all the inefficiencies. The BBBSWSP builds inefficiency considerations into its project development plans.”

Several hours later, the entire sack was either waterlogged or hemorrhaging wheat into the Sutlej. The new dam had morphed into a reservoir of wet wheat, and, thanks to the wind whipping up along the river bank, into a final resting place for dozens of “Food Security Bliss” publicity flyers.

Suddenly a loud noise erupted from the Food Security Bliss training site. A black SUV, driven by an NGO worker serving as the seminar instructor, had pulled into the facility. However, in its haste to swerve around a group of mobile phone-clutching USAID agriculture experts trying in vain to receive their marching orders from Washington, the vehicle slammed into the wheat sack, tearing open another big hole and discharging yet more wheat into the river.

The ministry media briefer exploded in rage. “Why must the foreign donors entrust their resources to the NGOs? If only they worked more through us, we would not have these problems.”

He sighed and removed some flecks of waterlogged wheat from his mustache. “The next sack will be even bigger,” he promised.