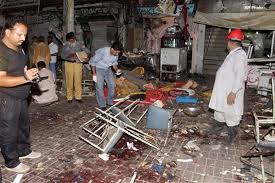 PARACHINAR, Pakistan — A pair of bombs exploded in a busy market area Friday evening in northern Pakistan, tearing through crowds of shoppers grabbing last-minute items to break their daily fast during the holy month of Ramadan and killing 23 people, a doctor said.

The blast struck a market in the town of Parachinar, which sits in the Kurram tribal area that borders Afghanistan to the west.

“We have no place to keep the wounded,” the doctor said. “Many of them are lying on the hospital floor and on the lawn.”

The two bombs ripped through the main bazaar in Parachinar when people were doing their evening shopping before the iftar meal that breaks the day of fasting during Ramadan, police spokesperson Fazal Naeem Khan said.

One bomb was believed to have been planted on a motorcycle and explosives experts were examining the site Friday night, he said.

The second bomb detonated about four minutes after the first, about 365 metres away from the initial blast, government official Javed Ali said.

There was no immediate claim of responsibility for the attack. The Kurram tribal region, like much of northwest Pakistan, has been roiled by violence for years. Taliban militants trying to overthrow the Pakistani government have carried out a vicious campaign of suicide bombings and shootings against Pakistan security forces and other targets.

Parachinar is also home to a large number of Shiite Muslims, which are a minority sect in Pakistan. Many Sunni militants do not view Shiites as true Muslims, sparking repeated fatal attacks.