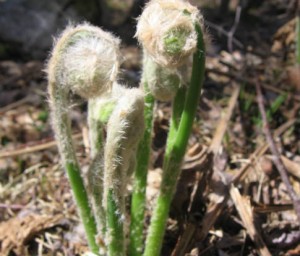 Even those who are unfamiliar with fiddle heads have undoubtedly been subject to their carcinogenic toxins through one form of ingestion or another. A compound called ptaquiloside (PTA) has been identified in these crosiers and proven to be a genotoxic carcinogen in vitro at doses as low as 5 micrograms per milliliter. Exposure occurs primarily by eating any part of the plant. Other concerns are indirect exposure via the milk or meat of grazing livestock and drinking infected groundwater. Inhaling spores is secondary to these but may have carcinogenic consequences as well.

The 21st Meeting of the European Association for Cancer Research concluded “…this suggests that PTA exerts its genotoxicity through multiple mechanisms and further support the hypothesis that PTA represents a significant threat to public health.” These findings were based on an experiment where minute doses of PTA induced DNA damage.

Dating back over 55 million years, bracken ferns have always been a widely used food source for wildlife, humans, and their livestock. Bracken is currently one of the five most abundant plants on Earth, populating every continent with the exception of Antarctica.  Extensive rhizomes allow the swift take over of newly cut or burned areas limited only by extreme temperatures and lack of humidity.

According to the 203rd Volume of The Journal of Hazardous Materials “… [ptaquiloside] is highly unstable towards, water, heat, light, and both acid and alkaline pH.” This would indicate that cooking the fiddle heads neutralizes the toxicity however the same volume further states that “Cooked or salted bracken was demonstrated to retain some of its carcinogenic potential.” This may be due to the presence of other suspected harmful compounds.

Several bracken varieties are known to contain prunasin, a cyanogenic molecule that acts as a deterrent against insects and herbivore mammals due to its acrid taste. Yet another harmful characteristic is the presence of two types of thiaminases which are responsible for vitamin B1 deficiency. The quantification is about 3.3 micrograms of B1 destroyed per gram of plant material per hour. Vitamin B1 inhibiting thiaminases, cyanogenic prunasin, and carcinogenic PTA all have one attribute in common. They are all found to have their highest concentrations in young crosiers before they unfold. Unfortunately the tender fronds are typically preferred before they unfurl when their toxicity is at its maximum.