Home / Agri Punjab / CATTLE IN FEEDLOTS MUCH HIGHER THAN FORECASTED

CATTLE IN FEEDLOTS MUCH HIGHER THAN FORECASTED 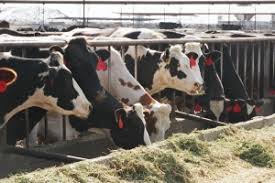 March marketings were below all estimates at 1.771 million head, 8% below last year, with one fewer workday in March 2013 than in March 2012. The average pre-report estimate was for a 6.5% decline. The total number of cattle on feed in the U.S. as of April 1 was 10.9 million head, 8% less than a year ago following months of lower placements and tightening feedlot numbers. Before the report, the average of analysts’ estimates was a 6.1% year to year drop.

Out of the total inventory, 6.91 million head were steers and steer calves, 4% less than last year and 63% of the total, while heifers and heifer calves were 3.93 million head, 8% under the April 1, 2012 total. Other disappearances during March were up 10% on the year at 76,000 head. Allendale’s David Kohli says the numbers look bearish for cattle futures.