Civics Turn Out To Honoure Gardford Farm Machinery In Agribusiness 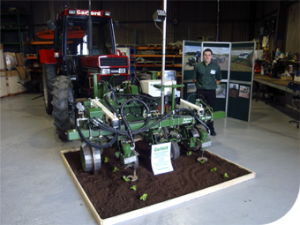 Civics Turn Out To Honoure Gardford Farm Machinery In Agribusiness

Garford Farm Machinery were officially honoured with the Queen’s Award for Enterprise, in the Innovation category, on Tuesday this week (7th September) in a full civic ceremony at their premises in Deeping St James. Garford were independently judged a worthy winner of the award, which recognises outstanding achievement in innovation, for their product the Robocrop InRow Weeder.

The Queens’ representative, the Lord-Lieutenant of Lincolnshire Mr Tony Worth and Deputy Lieutenant Air Vice-Marshal Peter Dodworth were in full regalia to perform the ceremony together with a host of civic guests from the county, including the High Sheriff of Lincolnshire Mr John Godfrey CBE. The ceremony, involving the presentation of the Grant of Appointment to Philip Garford (Managing Director), Michael Garford (Design & Technical Director) and Janet Garford (Finance Director), followed a tour of the factory where the Robocrop InRow Weeder and other products are manufactured.

Norman Garford, founder of the company, and who can still be found working at the factory on a daily basis, was on hand to give background information on the machines on display along with the locally employed staff. They also had examples of community involvement events which the company supports and bygone machinery made by the family, dating back to the 1950s.

On presenting the Award, Mr Tony Worth, the Lord-Lieutenant of Lincolnshire said, “Out of 414 applications for this award in 2010 only 38 received it of which Garford is one. This illustrates how prestigious and very rare the award is and if anyone gets it they really do deserve it because they have done something very special”. He went on to say “On being here today you really do appreciate the effort and thought gone into the machinery at Garford Farm Machinery”.

Garford were recognised for the Award in an announcement by the Queen’s Award Office on 21 April this year and following this they attended a Reception at Buckingham Palace where Philip Garford and Janet Garford were presented to the Queen.

The revolutionary product is the first commercial machine to use vision analysis techniques to manage weed removal between vegetable plants. With environmental practices high on the agenda and with European legislation eroding the armoury of herbicides available to vegetable growers, the Robocrop InRow Weeder shows the way ahead with mechanical weeding.

The Robocrop InRow Weeder uses digital cameras and image analysis to locate crop plants and then uses this information to control special weeding discs which hoe the area between the plants in order to kill competing weeds. This process is also beneficial in breaking up the soil and so improve plant growth, with many vegetable growers claiming considerable growth stimulation. Consumers are therefore able to buy produce grown without the use of herbicides whilst at the same time the grower is able to maintain profitable production.

The Lord-Lieutenant commented “the like of the special piece of machinery which Garford have designed are being developed right the way through agriculture today. With the use of technology available, and adapting that technology into designs, it makes life easier for us all to be able to compete with the rest of the world”. He went on to say “I congratulate you all on what you have done and hope that one day you will be in even bigger premises so that you are able to make more marvellous machinery like the Robocrop InRow Weeder.

Garford are thrilled to be recognised for their achievement and Philip Garford, Managing Director, said “Originally farmers ourselves, we feel privileged to be able to bring our products into action for farmers in this country and abroad. When we can help growers, shoppers and the environment, that is always a bonus”. He went on to pay tribute to the dedicated commitment of the staff, many of whom have been with the company for many years and live locally.

The Robocrop InRow Weeder is the first commercial product to use vision analysis techniques to control mechanical weeding equipment for weed removal between crop rows and between individual plants. The product is aimed at crops planted to a stand (each individual plant occupies its own position along the crop row to within a certain margin of error). In practice row spacings of between 22cm and 110cm and plant spacings of 15cm to 65cm have so far been accommodated although larger and smaller spacings can in theory be accommodated. Robocrop InRow Weeder has been most popularly employed in lettuce and brassica crops. Crop position can be determined to within a few millimetres.

A digital video camera views the crop area (up to 2 mtrs square) just ahead of the weeder.

A computer analyses the images at 25 frames persecond looking for clusters of green pixels.

The pattern of green pixel clusters are compare to a predetermined grid which relates to the nominal crop row width and in row plant spacings.

A best match scenario is determined between image and predetermined grid.

The individual plant positions are tracked as they travel down through the image.

The computer monitors and controls the position of specially designed weeding rotors, which loop around the plants as they pass by.

Adjustment is provided to set the proximity of the weeding action to the plants.

Weeding efficiency of up to 98% surface area is completed by fixed inter row shares.