Home / agribusiness / Compassion is against the cloning of animals for food. Compassion has been campaigning in the EU and in the UK against cloning for a number of years.

Compassion is against the cloning of animals for food. Compassion has been campaigning in the EU and in the UK against cloning for a number of years. 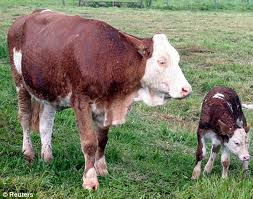 Compassion is against the cloning of animals for food. Compassion has been campaigning in the EU and in the UK against cloning for a number of years.

The case against cloning

The Cloning = Cruelty campaign highlights the intrinsic animal welfare issues of selective breeding in animals for food – i.e. meat and dairy. Research also shows that many cloned farm animals are born with deformed organs and live short and miserable lives.

The cloning of farm animals can involve great suffering.  A cloned embryo has to be implanted into a surrogate mother who carries it to birth.  Cloned embryos tend to be large and can result in painful births that are often carried out by Caesarean section.  Many clones die during pregnancy or birth.  Of those that survive, a significant proportion die in the early days and weeks  of life from problems such as heart, liver and kidney failure.

The serious health and welfare problems from the over-zealous use of more traditional selective breeding techniques are now well recognised. The European Food Safety Authority (EFSA), for example, sees genetic selection for high milk yield as “the major factor causing poor welfare” in dairy cows. Similarly, pigs bred for overly rapid growth often suffer leg, heart and lung disorders. In other words, the animals are being pushed to their physical limits and are often breaking down as a result. They are genetically selected to suffer.

The ethics of cloning are in question

The European Group on Ethics in Science and New Technologies (who also advise the European Commission) ‘sees no convincing arguments to justify the production of food from clones and their offspring’.

The Commission is preparing new legislation for 2013 on cloning animals for food and their use in the EU. The Commission has also commissioned a study to provide policy recommendations regarding the development & commercialisation of GM animals in EU.

Attack of the Clones?

In August 2010, cloning hit the European headlines when it emerged that meat from the offspring of cloned animals had been discovered in the UK food chain. Compassion’s campaign urged the UK government to call for an EU ban on the practice of cloning animals for food.

In just 2 days, over 7,000 signatures were gathered and in August 2010, Compassion marched 40 clones of David Cameron to deliver the petition to their clone, the British Prime Minister.