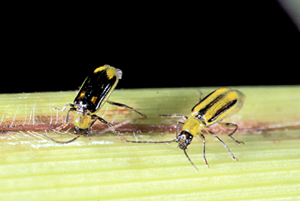 Both sexes of western corn rootworm adults are yellow to green in color with a black stripe along the sides of their wing covers and are about 5/16 inch (7.5 mm) long. However, male wing covers are often nearly entirely black or at least darker in pigmentation than that of the female, which usually appears as more regular stripes. Slight variations in these color patterns may occur. Female western corn rootworm adults have larger abdomens than the males.

The adult of the northern corn rootworm is a tan to pale green beetle about 1/4 inch (6 mm) long. Newly emerged beetles are usually cream or light brown in color, but gradually turn green with age. No marked differences in coloration exist between sexes, but female beetles with their longer and larger abdomens are typically larger than the males. 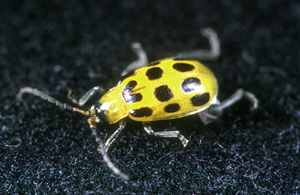 The adult of the southern corn rootworm, also known as the spotted cucumber beetle, is about 3/8 inch (9 mm) long, yellow to green in color, with 11 conspicuous black spots on its back. Because adults and larvae of this species are considered of minor economic importance in the Midwest, the following discussion on damage, sampling, and management guidelines will not include the southern corn rootworm.

It is extremely difficult to distinguish between larvae of the western and northern species. Rootworm larvae are white and slender, about 1/2 inch (13 mm) long when fully grown, have brown heads, and a dark plate on the top side of their “tails.” 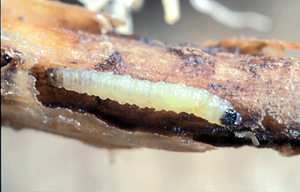 Western and northern corn rootworm have only one generation per year. Eggs of both species are deposited in the soil by female beetles from mid-summer until autumn. The eggs overwinter and begin hatching from late May to early June in most areas of the Midwest. The newly hatched larvae seek out and feed on corn roots. The larvae pass through three stages, or instars, before pupating in the soil. Primary larval damage is caused by the later instars, typically from mid June through mid July.

By late June to early July, adult beetles begin to emerge from corn fields. The males emerge first, the females following in about 5 to 7 days. Mating takes place a short time thereafter. Within 2 weeks of emergence, females begin to lay eggs, usually toward the end of July, with peak egg laying occurring in early to mid August. The beetles in corn fields feed primarily on pollen, green silks, or leaves (see information below concerning western corn rootworm in soybean).

Several factors influence the development of a rootworm population in a particular field, and these should be considered when scouting. Rootworm beetles can readily move between fields and may cause damage in locations other than where they emerged. A late maturing corn field can attract large numbers of beetles since neighboring corn may have stopped producing pollen, the beetles’ preferred food. Beetles may also move into corn and/or soybean fields which have an abundance of pollen-producing weeds, such as volunteer corn, ragweed, or foxtails. Some areas of the eastern Midwest have observed a steady and substantial increase of economic larval damage in first-year corn (corn following another crop). A behavioral variant of the western corn rootworm, that appears to have lost its fidelity for corn, can migrate to neighboring crops such as soybean to feed on pollen, flowers, and foliage, then lay eggs. 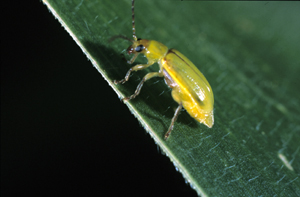 Soil texture is an important factor in regard to larval survival. Newly hatched rootworm larvae must move through the soil in search of corn roots and, as they move, they come in contact with soil particles. These particles, if coarse and abrasive, may scratch the cuticle of the larvae, resulting in death by desiccation. As a result, rootworms may be less of a problem in sandy soils. However, the effect of sandy soils can be modified by soil moisture. An irrigated or otherwise moist sandy soil will not affect rootworm populations as will the same soil under dry conditions. In addition, muck soils have shown a lower incidence of rootworm larval feeding damage and may provide some protection against this insect. 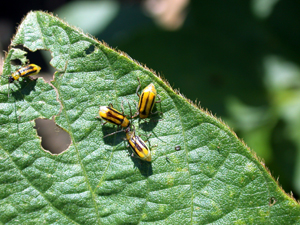 Both corn rootworm larvae and adults may damage corn plants. Newly hatched larvae feed primarily on root hairs and outer root tissue. As larvae grow and their food requirements increase, they burrow into the roots to feed. Larval damage is usually most severe after the secondary root system is well established and brace roots are developing. Root tips will appear brown and are often tunneled into and chewed back to the base of the plant. Larvae may be found tunneling into larger roots and occasionally in the plant crown. 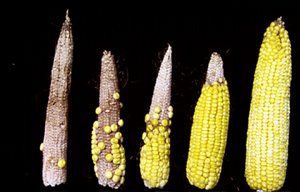 By reducing water and nutrient uptake of plants, larval root pruning places severe physiological stress on corn. Yield reductions may result, especially in corn also suffering from moisture, compaction, or fertility stress. Roots damaged by rootworms may be weakened to the extent that the plants lodge or grow in a curved “sled-runner” or “gooseneck” shape. These lodged and misshapen plants often pollinate poorly and are difficult to harvest, contributing to yield losses. Also, rootworm damage sites are often pathways for infection by pathogens. Thus, rootworm damage may be compounded by root and/or stalk rots. 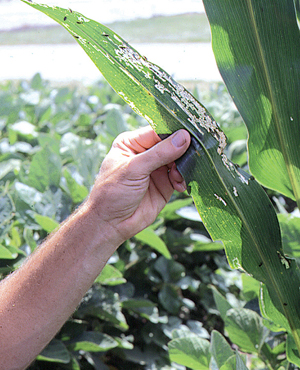 Western corn rootworm beetles can also cause damage by feeding on the green tissue of the leaves. Leaves may be partially or totally stripped by adults, resulting in a parchment-like appearance to the damaged area. Unless these beetles are unusually abundant, only scattered plants are severely damaged. However, such foliar damage can be indicative of a large adult population which may be a serious threat to pollination and next season’s corn roots.

Larvae in Corn – It will not be necessary to survey all corn fields for corn rootworm larvae. Sample those corn fields with suspected insecticide failures or fields in which a high adult rootworm population was observed, the previous July-August. Also sample corn fields that were in other crops like soybean the previous season, if beetles were observed or suspected as being present in those crops the previous year.

Randomly select 1 plant in each of at least 10 areas of a field. Using a spade or shovel, cut a 7 inch (18 cm) cube of soil around the base of each plant, making certain that the blade of the tool enters the ground vertically to avoid cutting roots. Lift the plant and soil out of the ground and place them on a small piece of dark canvas or plastic. Slowly break the soil away from the roots and carefully examine the soil and roots for larvae. The dark background will make it easier to find any of the small white rootworms. The soil and root sample can also be washed in a pail of water to extract the rootworms. The rootworms will float to the top and can be counted. The addition of salt to the water will float the worms to the top more easily.

Adults in Corn – Surveys for rootworm beetles should begin shortly before corn silking commences. Several factors must be considered when planning adult rootworm scouting activities. Rootworm beetles are extremely active and can be readily observed feeding, mating, and flying about an infested field. However, such activity varies considerably with the time of day, and such behavior patterns can greatly influence field counts. Beetles are most active in the morning and late afternoon, limiting their activity during the normally higher temperatures of mid-day. Thus, to get the best indication of true population levels, sample in the morning or late afternoon.

Also, corn hybrids, even of the same maturity, vary to some degree in their time of pollination. Therefore, if a particular field has been planted to more than one hybrid (not blended together), each hybrid must be scouted separately.

To determine if rootworm adult sampling is necessary in a particular field once silking has or is about to begin, quickly walk across the field. If no beetles are observed in the ear zone area or on the ears, no further scouting will be necessary at this time. However, return to the field in 2 to 3 days to again check for beetles. Even if no beetles are found, you should check a field twice weekly until the silks have been pollinated and then once weekly until early September for egg laying activity. If you do see beetles in the field, definite counts, using one of the two following scouting methods, should be made immediately.

Adults in Soybean and Some Other Crops – Two sampling methods, sweeping and sticky traps, can be used in soybean and other non-corn crops to determine the potential for western corn rootworm larval damage to next year’s corn roots. Both methods need to be implemented and carried out from the end of July through the first week in September.

For years, crop rotation has been a major management strategy for corn rootworm. As a general rule, rootworms cannot successfully complete their larval development on crops other than corn. Thus, if rootworm eggs are laid in a corn field one season and a soybean field the next season, the young larvae find themselves without a suitable host plant and soon starve to death in the soybean field. However, where the western corn rootworm variant or the northern corn rootworm extended diapause trait exists in the Midwest, crop rotation by itself is no longer an effective management strategy in all regions. Sampling for larvae and adults, as described previously, is imperative to apply the following management guidelines.

Adults in Soybean and Other Crops – Data is not available for the exact number of western corn rootworm beetles needed in soybean or other crops to cause economic larval damage in corn the following year. Consult with university researchers in the Midwest for new developments on the establishment of an economic threshold(s). Finding “numerous” western rootworm beetles versus a “few” in these crops during the sampling period may help one determine whether an economic problem in the following year’s corn crop may occur.