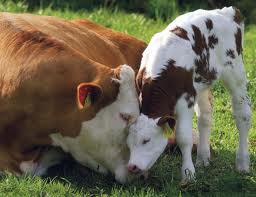 Where do cattle come from?

Cattle were domesticated as long ago as the Neolithic age and have been kept as livestock ever since for their meat, milk and hides.

Historically there was less distinction between dairy cattle and beef cattle, with the same breeds used for both milk and meat. However, in the developed world today farmers generally keep either beef or dairy cattle. Through generations of selection, dairy breeds, such as the Holstein, are bred specifically to produce very high volumes of milk.

The calves of dairy and beef cows are likely to have very different lives. Beef calves are generally slaughtered for beef after one to two years. Female dairy calves are usually reared on for milk production. Dairy cows produce some male calves which are generally less suitable for beef production. Sadly, in the UK some of these are either shot at birth or could be exported to low welfare veal farms outside the UK. Fortunately the number of calves being exported from England, Scotland and Wales is low currently, but several thousand animals are exported to the continent each year from Northern Ireland.

Due to co-operation between Compassion in World Farming, the RSPCA and the industry through the Calf Stakeholder Forum, more male dairy calves are now reared humanely for beef and the number of calves being shot at birth has greatly decreased. There is more work to do – around 100,000 or so are still shot every year.

Beef cattle are often reared outdoors on grass, although many are brought indoors or crowded into feedlots for fattening before slaughter. Even though many cattle in the UK, Ireland and Northern France are fattened on grass, many cattle are fattened indoors across most of Europe. In indoor systems, beef cattle are commonly housed on slatted floors in crowded conditions, which increases aggression and can lead to severe injuries and lameness.