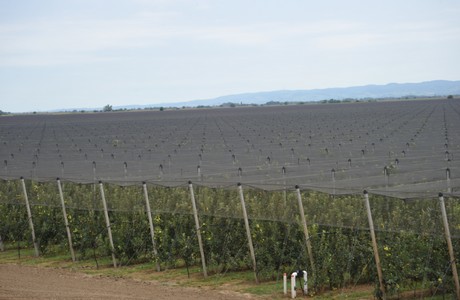 After a frost cut apple production in Serbia last year, Delta Agrar, an apple grower and shipper based in Novi Beograd, Serbia, is planning on 2013 bringing much better yields.

Delta Agrar, which is part of Delta Holdings, has 350 hectares on which they grow a large variety of apples. In addition to that, they have partnerships with other growers that augment their own production by about 10,000 to 12,000 tons every year. That extra fruit was put to good use last year as Delta’s yields were diminished by adverse weather.

“Last year, apple production was difficult because of severe frost during winter, late spring frost during the flowering period and high summer temperatures,” said Slobodan Kosutic, Delta Agrar’s director of fruit and vegetable business. “So our apple yield was lower, but we expect 2013 to be much better.” Kosutic predicted that, if everything goes according to plan, they’ll produce 12,000 tons of apples in 2013, which would be significantly higher than last year’s production of 8,500 tons.

Over 80% of Delta Agrar’s apples go to the export market, and Russia is the main recipient because of an agreement between Russia and Serbia where fruit exporters aren’t required to pay customs fees. Last year’s dip in production left some of Delta Agrar’s markets hungry for apples, so the increase in volume should be welcome in Russia and neighboring countries.

Going forward, Kosutic said they plan to expand their existing acreage to 600 hectares. Combined with their high-tech storage facilities, which continually adjust oxygen and carbon dioxide levels to achieve long storage times, Delta Agrar will be even better poised to supply Europe with apples on a year-round basis.

“We expect to have good yields this year, and our expectation is that demand will increase,” said Kosutic. “We hope 2013 will be a good production year.”