Home / agribusiness / Determining How Much Nitrogen Is Present 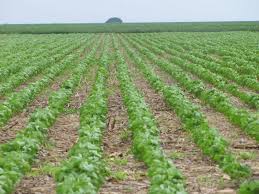 Determining How Much Nitrogen Is Present

With a still fresh memory of the drought conditions during last year, recent rains have reduced concerns over water availability for the start of the 2013 growing season, but at the same time, concerns over nitrogen (N) loss have increased.

Nitrogen loss is difficult to predict because it depends in many factors such as time of N application, type of N source, soil type and temperature, and the amount of precipitation received. While it is difficult to know how much N is lost without a direct analysis of soil N, I would like to provide some information that can help you determine what to do about N applications this growing season.

Most of the fall-applied N is either ammonium (NH4+) or a form that transforms rapidly into ammonium. Nitrification, or the conversion of ammonium to nitrate (NO3-), is a bacteria-mediated transformation. The bacterium Nitrosomonas converts NH4+ into nitrite (NO2-) while the bacterium Nitrobacter converts NO2– to NO3-. The activity of these bacteria is minimal at temperatures below 50ºF. These bacteria also need aerobic conditions (unsaturated soil-water conditions) to nitrify ammonium. Thus, the amount of nitrification that occurs in the soil is largely dependent on soil temperature and the time elapsed from application until the soil becomes saturated with water. Further, the nitrification process can be reduced with the use of nitrification inhibitors that reduces the activity of Nitrosomonas and allow N to stay in the ammonium form for a longer period of time.

When soils become saturated, the potential for N losses is directly related to the amount of N present in the nitrate (NO3-) form. While wet soil conditions this spring may be a reason for concern that some of the N applied last fall may be lost, the cold temperatures we had until recently likely substantially reduced nitrification. From now on, as temperatures increase, nitrification will also increase. When nitrate is present and soils warm up, N loss will start under saturated water conditions mostly through denitrification in fine-textured soils and through leaching in coarse-textured soils or intensively drained soils.

An important point to keep in mind is that the portion of the applied N that is in nitrate form is only subject to denitrification or leaching. However, the fact that N is in the nitrate form does not mean that N is lost; it simply means that it is susceptible to loss. Data from a study conducted a number of years ago (Table 1) provides a measure of the percent of ammonium that was transformed to nitrate by the end of May from three locations in Illinois depending on whether a nitrification inhibitor was used and when the application was done.

Table 1. Percent of Ammonium Converted to Nitrate from Date of Application Until the End of May at Three Locations in Illinois

The following calculation is a hypothetical situation given as an example using the data in Table 1 and current soil temperatures below 65°F:

Let’s assume that 180 lb N/acre were applied in early November with a nitrification inhibitor in a silty clay loam soil in DeKalb and soils were saturated for 5 days in late April.

If leaching is a greater concern than denitrification, for each inch of precipitation, nitrate moves approximately 5 to 6 inches in silt loam and clay loam soils and approximately 12 inches in coarser textured-soils.

The above discussion was for fall N applications. However, this year an important concern is the potential for loss of the carryover N for fields going back to corn this year. As we indicated in earlier bulletin articles some fields had substantial amounts of N after last growing season. Most of this N was in the nitrate form, thus the potential for loss by leaching since last fall was not related to temperature, but by the amount of excess precipitation. The fall and winter were relatively dry and most of the precipitation was used to replenish water in the soil profile. Unfortunately, excess precipitation in April has made it so that some of that carryover N is no longer available.

What To Do Now

Regardless of how much nitrogen may or may not be present, if you have not planted your field yet, it will be more important to plant now and apply additional N later so planting is not delayed further. One way to determine the need for additional N in fields where substantial carryover N is suspected or where the soil has high potential for mineralization (for example fields where manure was applied within the last 2-3 years) is to use the pre-sidedress nitrate test (PSNT) during late May to early June. This timing should work well to allow results to comeback from the testing lab with ample time for a sidedress application. An additional advantage to collecting soil samples starting in late May is that the test provides a good reliable measure of N because 1) the potential for N loss of all the N present in the soil is low by the end of May and 2) since soil temperatures are warm by then the test will measure mineralized N from the soil organic pool in addition to other sources such as carryover N. The sample needs to be collected from the top 12-inches of the soil. lf the field had a history of broadcast applications, randomly collect 20 to 25 samples from an area no greater than 10 acres. If band applications of fertilizer or manure were used to fertilize the previous crops, make a sample by collecting at least 10 sets of three cores each between two corn rows. The first core is collected 3 inches to the right of the corn row, the second core in the middle of the two rows, and the third core 3 inches to the left of the next corn row. Collecting a sample less than the full 12 inches or not collecting all the cores will produce unreli­able results. If the samples cannot be delivered to the labo­ratory the same day, either freeze or quickly air-dry the sample. Make sure to tell the labora­tory that you want to measure NO3– nitrogen. If the test results comeback above 25 parts per million (ppm) no additional nitrogen will be necessary. If results are less than 10 ppm a full rate will be needed (as long as no yield potential has been lost). If test levels are between 25 and 10 ppm, the N rate should be adjusted proportionally.

Another way to determine if additional N will be needed is to establish a couple strips with 10 to 25% more N than the full application amount planned, and then compare the color of the crop as the season progresses. If the strips are substantially greener than the rest of the field any time before tasseling, that would be an indication that additional N is needed. Some of the potential drawbacks to be aware of when using this approach are that color differences could develop too late for a timely application, or that there might not be sufficient rain to move the late-applied N into the root zone.