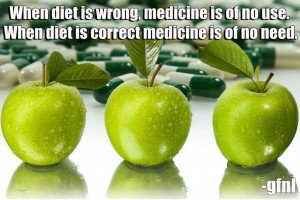 The Detroit suburb of West Bloomfield is home to Henry Ford West Bloomfield Hospital, which recently made news headlines nationwide with the opening of its new million-dollar organic greenhouse and garden, which is believed to be the first of its kind in the United States.

The greenhouse’s manager and gardener, Michelle Lutz, sat down for an interview with AltHealthWORKS.com to discuss how the project began, the state of hospital food in America, and what the natural health community can do to affect change in other parts of the country.

AHW: Tell us a little bit about how this project got started and what your role was in making it a reality.

ML: The vision for the greenhouse goes back several years to our CEO Gerard van Grinsven…he had the idea to open up the hospital with a different perspective on…he says we’re in well care, not sick care, so we have a lot of wellness components to our hospital and the greenhouse was always part of the original vision. Funding was an issue and they had an anonymous donor donate the funds to make the greenhouse and educational center a reality so they got pretty serious about starting to execute the plan of doing this greenhouse.

I came out to the project in November and there were a few things that had already been decided, for example the whole building design, all of that…I just got involved and helped them decide what we were going to grow and how we’re going to grow it.

AHW: Where did they bring you in from, and were you always an organic farmer?

ML: I’ve had my own farm for the last 17 years and I left the farm in the fall of last year and came on to this project.

AHW: How did you get connected to the hospital and did you ever dream you’d be a “hospital farmer?” Is that a new profession you’ve cooked up?

ML: The relationship (with Henry Ford) goes back to when they opened up the facility three years ago…When they opened the hospital they decided they were going to do food differently. They were going to use local growers who use sustainable practices and buy food from them. The farm I’ve had before, we did that, we grew food for the hospital and sometimes we’d do cooking classes together, and a kids camp program; I’d come in and work with the kids for a day.

There was an ongoing relationship and I really liked the idea of them having the greenhouse and had I known it was going to be available. I probably should have expressed interest in being the person behind it from the beginning because the educational component is very important to me. Sometimes as a grower you kinda get caught up in…that and you don’t have a lot of opportunity to share with kids and adults.

AHW: What was the food of the hospital like before this garden came in? Was it still a big improvement over typical hospital fare?

ML: Oh my God, our food is incredible they have people who come in every day to eat there who have nothing, no appointments, people stopping in to eat. (We visited the cafe later and were impressed by its menu which included a massive salad bar using local organic produce, organic teas, smoothies, some juices and more including a tempting selection of gourmet pizzas, although there was some less-than-healthy fare included such as sugary drinks).

AHW: Aside from that, what is the food used for, is it served at the cafe, are there doctors who make recommendations saying (for example), “You need more vitamin C so go get some strawberries or greens from the greenhouse” or anything like that?

ML: It’s my understanding that for all our patients the doctor recommends whatever their diet should be in the hospital…It would be depending I guess on what the doctors recommendations are but in the cooler there is a place for the produce that I bring in from the greenhouse so when the chefs come in they they know immediately where it’s at.

There’s a board listing for every day what we bring in and they’re free to use it for whatever capacity they need to whether it be for patient dining or (other uses).

AHW: Do they do juicing there too?

ML: We’re talking about now dedicating this space…We have a weekly farmer’s market, and we’re talking about doing juicing at that station. I don’t think that the greenhouse may be able to provide everything that may entail but we might collaborate with some other growers and get all local products and achieve the amount of volume that we would need for something like that because I could see that going over as very popular.

AHW: And now with the 1,500-square foot facility does that provide enough for the entire hospital, or do you?

ML: The intention isn’t for me to produce all of the food for the hospital, I could do that but I would need more greenhouses and some more outside space. But I am trying to produce as much as I can for the kitchen. The very first day we started growing was June 11 so I’m really in a few months, but I can tell you what we have already achieved: We took over microgreen production within two weeks, we stopped ordering basil within 30 days on the project; we were pretty set on basil which is one of their heaviest used herbs there in the kitchen.

AHW: It’s maybe a little easier to obtain basil than some of these other types of herbs in the kitchen, right?

ML: Yeah…Collectively in the kitchen we reduced their need to bring in other greens by 50%. We’re keeping track and a few more months down the line, I really hate to make predictions but it’s the truth… We’re going to report back what we’ve actually achieved on the job.

AHW: Can you see any reason why other hospitals would not consider adopting this same plan?

ML: That would be great besides the whole food production since I’ve been out there there have been some really neat patient-family experiences…People come out here taking a walk, they want to get out of the hospital. I get people who, the way the hospital is designed is a lot of the patient rooms overlook, and they see the greenhouse…People watch from their window what’s happening in the greenhouse. I’ll see them in the hospital and they’ll tell me about it (later).

AHW: It can only help their mental state I would imagine…It has been shown that workers who have views of natural settings are happier and more productive, for example.

ML: We had a patient who was in a state of depression for 7-10 days and the nurse called me up saying she misses her garden. We brought her out and I spent a little time with her…She almost came out of her wheelchair, she was like, “Whoa!” In just 15-20 minutes, it was so nice to see that her mood was that uplifted.

I say to everyone this is an ageless opportunity…A huge focus is on kids, (tackling) childhood obesity is one of our main purposes, teaching prevention…It’s really for everyone. We want to show a way to grow better, eat better, avoid chronic diseases and to heal if you have chronic diseases. Food is medicine, and that’s the component of our wellness program at the greenhouse.

AHW: So are you the first organic farmer in a hospital in the United States, is that official?

ML: I am not, they thought that at first but there’s a gentleman out of a hospital in Ann Arbor I think it’s called St. John’s near there…from what I understand they have a hoop house there so I’m not the first one. I tell everybody I don’t want to be one of the only ones; I hope that hospitals, people adopt this everywhere because this is really important from just about every institutional aspect really, schools, hospitals, we’ve got to change how we’re doing food.

AHW: So you had the ability to choose all of the produce growing in the greenhouse?

ML: I talked to the chefs and found out what they were using…picked their brains…they’re also totally willing to change it up. I’ll use the lettuces during the hot summer, we had had to pick only varieties that had (certain traits) now that things are cooling off can get a little more interesting, they can get back to what they want now that it’s cooling down. They have a selection and chose a lot of things that taste really good. We have a lot of heirlooms and varieties with higher nutrition.

AHW: What do people say about the taste compared to what they get from the supermarket?

ML: They like it….I think basil gives them the most taste. Someone was standing across the hall it and smelled it, they said it smacks them in the face, they love it and tell me kind of like going through your own backyard garden.

AHW: Whats your impression of food served in the majority of hospitals now?

ML: You know, I really avoid hospitals so I don’t know but I’ve been told it’s like…jello…and…

AHW: Yeah, everybody knows about the jello.

ML: And it’s not really great stuff so I think it’s nice you can go to a place where the food is going to be good for you and it’s going to actually do something for your body while you’re trying to heal. I eat our food all the time.

AHW: What do you think needs to change for other hospitals to adopt this, and how would you recommend people work to make that change?

ML: I think funding is a problem, it’s a real big aspect of that. Somebody made a donation to make this happen and that’s why that building was there. I don’t think you have to have something as luxurious as we do to adapt to growing (more organic produce).

I don’t know, I just feel like we’re on the verge of change, I’ve been in local agriculture and growing for the last 17 years and in the last five and now the last two I find that things are really starting to change and agriculture is becoming the new hot subject I think more people are embracing this whole concept of reconnecting with local food systems and how fresher food is better for you. How do we make these changes? I guess policy, there are aspects about how we handle food in all areas of food service contracts. 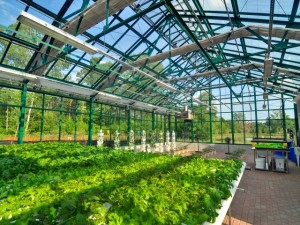 The greenhouse features strawberries, tomatoes, microgreens, and much more.

AHW: Have you heard about McDonald’s signing contracts and being served in hospitals?

ML: No I haven’t…really…why would you want McDonald’s in a hospital? That’s not going to help anybody.

AHW: How do you see people taking to the new greenhouse so far?

ML: We have people coming out all day long, they were excited to see this come out. Mostly people at the hospital….employees come out every day, a couple of school groups, boy scouts, girl scouts, seniors.

Yeah everybody, the doctors coming out, nurses coming out. Everybody really likes it.

AHW: Do you miss your farm?

ML: Of course I do but this gives me an opportunity to do a lot of things I’m passionate about, to grow food, to teach people. I’ve gotten quite a few emails already from people.

Hopefully this will inspire someone to say, “I want to set up my own healthy farm.” That’s just nice to hear.