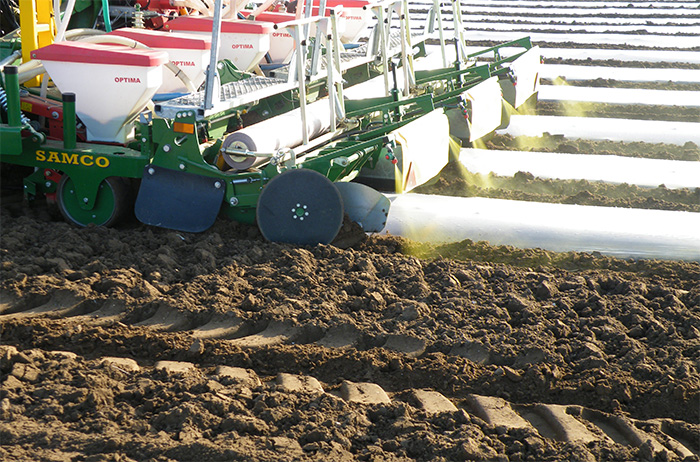 Maize growers have been urged not to rush into drilling crops this spring, despite the mild winter and relatively high soil temperatures.

Early-sown crops are more prone to being “knocked back” by colder weather, which will reduce yield potential and possibly put them at greater risk from wireworm damage, says Hutchinsons maize specialist Ed Stevens.

Underlying soil conditions are also still very wet in most areas after record-breaking winter rainfall and travelling too early to subsoil or create a seedbed could damage soil structure, which will have knock-on effects for crop growth through the season, he adds.

“Maize is a very temperature dependent crop that needs quick, uninterrupted germination and growth, so growers need to give it the best chance of having these conditions. It needs a consistent soil temperature above eight degrees Celsius to germinate and above 12 degrees to grow properly.”

Although some lighter soils in more sheltered parts of Norfolk were already at six degrees by the third week of March, he says maize drilling should not be getting underway in earnest until the middle/end of April, although some light, sheltered land may be ready slightly sooner.“There is a trend towards people starting maize drilling earlier, especially where they have big areas to cover. But you’ve got to wait for it to warm up properly, particularly on heavier land.”

Increased risk of wireworm, especially in maize after grass, set-aside, or close to 6m margins, is a strong reason for delaying drilling this spring, says Mark Orton, regional director at Shropshire-based Hodges & Moss.

The loss of clothianidin (as in Poncho) seed treatments following the two-year ban on neonicotinoids has left growers desperately short of any comparable chemical alternative, so wireworm control will rely heavily on cultural methods, he says.

“Delaying drilling, possibly until the first week in May, will ensure the crop gets away in good, rising, soil It is also worth consolidating seedbeds well and increasing seed rates by 5-10% in at-risk crops to allow for wireworm damage. “Where you’re normally sowing 43,000 seeds per acre, perhaps go to 45,000 and if you’re normally nearer 45,000, then try nearer 48,000, for example.”

Increased wireworm risk and more nutrient leaching from soils after the wet winter means that starter seedbed fertilisers, such as diammonium phosphate (DAP), Maxi-Maize, or the micro-granular phosphate fertiliser Primary-P, are likely to feature widely this spring, says Mr Stevens.

Such products ensure readily available nutrients are in close proximity to the growing seedling and are of particular benefit if conditions turn dry later in the year, he says. “Placed fertilisers also mean the crop has got something to keep it going if subsequent fertiliser applications get delayed.”

Slow-release foliar nitrogen may also be worth considering later in the season, says Mr Orton. Field-based comparisons of one such product – Efficie-N-t 28 – last season showed a stronger yield response than was achieved with standard ammonium nitrate and it offers more flexibility for application timing. “The nitrogen in the product is used much more efficiently and it’s formulation delays nitrogen availability over a longer period than AN. You can apply it as late as you can feasibly travel through the crop.”

An additional, growing, threat to maize crops is eyespot, and the disease could warrant control later in the season, notes Mr Stevens.

It is generally more of an issue in western parts of the UK, where many crops are treated as a matter of course, but wet weather during late spring/summer could favour its development almost anywhere.

“Eyespot requires the leaf to be wet for at least six hours in order for the pathogen to get into the plant, so it does have to be quite wet for it to be an issue. If the weather is wet and you’ve got a susceptible early variety then it’s probably worth treating, but you’ve got to do it before the eight to nine-leaf stage as that’s the last time you can get through the crop.”

Recently certain pyraclostrobin-based products have been granted Extensions of Authorisation for minor use (EAMU) for use in maize to control eyespot. These may be applied as a single spray or a two-spray sequence, ideally at the 4-8 leaf stage, followed by a second application during tasselling. These sprays have also been found to increase green leaf area and photosynthesis as well as increasing cob size and quality leading to increased yield.

Wider uptake of on-farm anaerobic digestion has led to a marked increase in the amount of maize in the ground, especially in his part of East Anglia, Mr Stevens notes.

“In Norfolk alone I know of five or six AD plants already running and there are another three to four being commissioned. Maize still makes up about 80% of the feedstock for these plants, so it is having quite an impact on the demand for land in this area.”

The approach to agronomy for such energy maize varieties is generally the same as for forage crops, although some growers can use higher seed rates – perhaps up to 45,000 seeds per acre, compared with 42,000 for forage maize, he suggests.

“Plants are that bit closer together, which encourages them to grow taller and generate the dry matter, at the expense of smaller cobs.