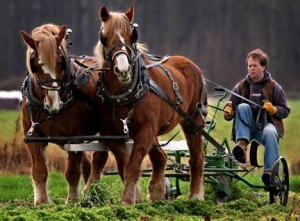 Draft Power: Using horses, oxen and mules on the farm

Farming with draft animals may appear, to some, as  a nostalgic diversion or an antiquated practice, a vestige of times gone by. For many farmers, it is much more—a practical means of accomplishing the daily work of farming without sacrificing economy, beauty, or sensitivity to the land and soil.

When it comes to comparing a draft team to a tractor, Tristan Klesick says there’s a place for both. Klesick, who runs the 37-acre Klesick Family Farm in Stanwood, uses both horse- and diesel-power. When asked about the value of farming with horses, he is quick to support the practice.
“I absolutely think there’s a place for it in the American system. In terms of scale, you might want to go smaller. It works on five acres.” It will work on three, he says, but “you have to have enough land to justify it. If you don’t use the horse, you’re better off getting a tractor. If you have a few acres, you can put a team to work.”
With smaller, more affordable equipment and with good teams starting at just a few thousand dollars, he points out that horse farming can be an economical choice for the small farmer.
Klesick enjoys working with his 17 hand Belgian draft horse, half of what was once a team. Though he assures me that one horse can still do valuable work around the farm, he’s thinking of seeking out a smaller team in the 15.2 to 16.2 hand range—that is, 62 to 66 inches at the shoulder. “You don’t need to have a lot of horse,” he argues. “You want a horse with a powerful, healthy muscle structure and good angles in the hindquarters.” Klesick tips his hat to the moderately sized draft animals of historic farms, noting that “America was built with a smaller horse.”
Comparing small horses to large is one thing, but comparing them to mules or oxen is entirely another. Mules, with their reputations for disproportionate strength, excellent hooves, and stoic sensibility, are often valued on the farm. Ray and Gert Tjoelker of Custer, competed with their team of mare mules in the 69th annual International Plowing Match in Lynden, Washington this April. The sorrel mares stood in perfect obedience amid towering draft horses, and broke a beautiful, straight furrow as the contest began. “They hold their own,” Gert told me. It was her seventh year with the team, and I was assured that the beautiful, diminutive Patti and Katy had always shown well at the event.
Like mules, oxen are often chosen for their manageability. The ox—a mature, castrated male bovine—has long been prized for its strength and docility.
Kerry Smith of Hancock, New Hampshire (who initially introduced the author to the joy of working with oxen) values his heritage breed oxen for their health, vigor, and great temperaments. He’s watched small children safely guide a team weighing 4,000 pounds or more, and works his own oxen without restraining devices of any kind. “You can work without reins,” he points out. “The equipment is simple—a yolk is often used, rather than a harness—and the team works under voice control.” Smith’s Randall Lineback team, Maestro and Salt, demonstrate their docility in parades, demonstrations, and Revolutionary War reenactments, while his third ox, Pepper, pulls firewood for a nearby family. “A good team is priceless,” Smith says, though he points out that one must spend time with one’s animals to develop their quality. “You have to spend a lot of time with them to have a good team.”
Klesick, the horseman, agrees. “In order to have an effective working relationship with your horse, you need to have daily work and a couple of hours of it. Otherwise you might find yourself having  to refresh your horse’s memory (or desire) before you can get to work. Sometimes that can take longer than the work you have for the horse to do!” He also encourages the beginning handler to find an expert and take a week-long class. “Immerse [yourself] in the realities of actually accomplishing work with horses or oxen.” For further learning on the subject of draft animals, Klesick recommends the Small Farm Journal (www.smallfarmjournal.org).
The pace of work, of course, is different when you turn off your tractor. “With a tractor you just keep going,” Klesick points out, “but these are physical beings—they need to catch their breath.” Klesick enjoys a breather, too, and uses these moments at the end of a row to enjoy and reflect. “You have to want to do it,” he says, “but if you’re good with animals and you don’t mind taking a rest every so often—giving them a rest—it can be pleasurable. It’s a different kind of beauty.”
Enjoyment aside, Klesick said horse power is a practical tool on the small farm. “The Amish . . . are prosperous farmers,” he reminds us. “It’s worked for [them].” Their ability to heal, to produce compostable manure, and to reproduce strike the farmer as additional benefits of animals over machines. If the right team is selected, the benefits increase. Klesick speaks of strength, temperament, and conformation, but then he tells me there’s more to the equation: “”I would encourage someone to buy a horse with a great attitude, but also a horse you like to look at. You’re going to have to spend time with it, and you want to enjoy that time.”
When it comes to the global picture, our reliance on oil deserves consideration. Though he’s quick to assure me that he’s not a conspiracy theorist, Klesick understands the true cost of oil and the uncertain future of the non-renewable resource. “If it comes to rationing, they’re going to cut me off first. They’re going to give the oil to the big farms that feed a lot of people. It probably won’t happen in my lifetime, but it could happen in my childrens’.” Should his tractor run dry, Klesick has an alternative. “If I have a team, I can keep working.”
Whether motivated by economy, ecology, or love of the animals, a small farmer with a working team of horses, oxen, or mules has both an asset and a responsibility. “The horse is beautiful, but it’s on all the time,” Tristan Klesick reminds me. “You don’t turn a key and shut it off.” Nor, say farmers, would you want to.