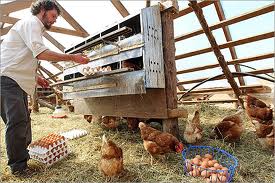 “The history of the poultry industry provides the best illustration of what happens as animal production systems increase productivity through capital intensification.  Because of the demands of expensive equipment, only large companies can afford to enter the business and to expand production; when they do, smaller operators are gradually squeezed out.  A poultry industry magazine reported in 1975 that expansion in the egg business ‘is being done mainly by the large complex-type operations or corporation made up of producers, hatcheries or processors.’  The magazine reported ‘very little, if any expansion’ of small (thirty-thousand-bird), individually owned egg farms” (“Egg Business Roudup: The Big Boys Are Doing the Expansion,” Poultry Tribune, Feb.1975, p.8. cited in Mason, Jim and Singer, Peter, Animal Factories (rev. ed.), New York: NY: Harmony Books, 1990, p. 147).

This process has happened in Connecticut as KofKoff Egg Farm now controls 90 percent of the states egg market while small commercial farms have, according to the president of the Connecticut Poultry Board, “gone out of business.”

The American government has been complicit, even encouraging, in the growth of agribusiness and the destruction of the era of the family farm.

“For years, government tax policy has subsidized the factory approach to animal farming and promoted specialization at the expense of diversity and versatility in farm systems.  It promoted hardware rather than human inputs to production.  In many states for example, portable confinement units are not considered buildings or real estate and are not subject to real property taxes”  (Animal Factories, p. 130).

“Who pays for the scientists and officials who are leading agricultural technology toward the use of more hardware and energy, employment of fewer and fewer people, greater specialization and vulnerability, and monopoly control of food production?  We do.  The bulk of agricultural research in the United States is conducted by the tax-supported ‘land-grants’ college complex and the USDA” (Animal Factories, page 131).

Agribusiness corporations and national promotion outfits, such as the American Egg Board,  deceive consumers with the goal of limiting consumers’ ability to make educated consumer choices.

This deception begins at a very early age with the Egg Board heavily targeting children.

“The United Egg Producers (UEP) has developed bird welfare guidelines ‘for dealing with animal welfare advocates and environmentalists.’  According to UEP, most factory egg farms can be called ‘family farms’ – a description that inspires guilt in, and thus helps to deflect criticism from, urban-dwelling activists.  These guidelines amount to no more than a summary of current egg factory systems and management practices.  Most manipulative is the guidelinesí discussion of what the egg industry called ‘forced molting’ before animal rights came along.  Now it is called ‘induced molt…  Under UEP guidelines, debeaking is now called ‘beak trimming,’ and it is said to be done to remove the ‘sharp tips’ of birds’ beaks to prevent them from hurting each other…  Producers are told to avoid words like ‘crate’ or ‘cage’ when talking to the public” (Brown, Robert H., “UEP Developing Bird Welfare Guidelines for Family Farms,” Feedstuffs, June 20, 1988. cited in Animal Factories, p. 176).

The poultry industry has known for some time that the factoryís impact on animals depresses food quality.  It uses chemistry to impart flavor, color, and other characteristic lost or distorted in the factory process.  Most commercial poultry operations therefore use feed additives containing xanthophylls, zeaxanthis, marigold petals or extracts of them, and caroteneic acid to enhance the yellow color of factory egg yolks.  The brighter color may be attractive to the shopper’s eye, but there is evidence that color additives actually lower the quality of eggs.  More important, eggs from caged layers may be lower in some nutrients particularly vitamin B12 and folic acid than eggs from free-ranging hens (Animal Factories, p. 62 and 65).  These measures are taken solely in an attempt to deceive consumers.

“When manufactures of vaccines need high-quality eggs, they don’t buy them from factory farms but from Amish farms with smaller flocks and manual labor methods”