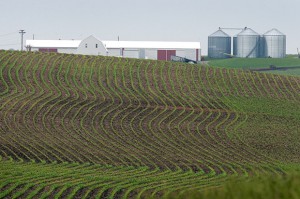 The agribusiness giants would have us believe that our inherently unsustainable and morally reprehensible factory farming system is the only way to feed the world’s burgeoning population. But the facts prove otherwise. Factory farming is all about maximizing profits for a handful of the world’s largest corporations.

Feeding huge numbers of confined animals actually uses more food, in the form of grains that could feed humans, than it produces. For every 100 food calories of edible crops fed to livestock, we get back just 30 calories in the form of meat and dairy. That’s a 70-percent loss.  And recent research from the University of Minnesota shows that reallocating croplands away from fuels and animal feed could boost food available for people by 70 percent without clearing more land.

How did we end up with this cruel, unsustainable, unhealthy, environmentally destructive factory farm model? The numbers say it all.

The Bigger the Farm, the Larger the Taxpayer Subsidy

Only $39 billion: Total amount in conservation payments paid to farms between 1995 and 2012.

62: Percentage of farms in the U.S. that did not collect any subsidy payments.

$15.8 billion: Cost to U.S. taxpayers in 2012 for providing crop insurance – an overwhelming majority of which went to the largest factory farms.

$90 billion: Cost of crop insurance to U.S. taxpayers over the next 10 years.

$10.3 billion: Amount since 2001 that insurance companies have enjoyed in underwriting gains – while taxpayers have lost $276 million.

$227,000: The amount the top 1 percent of policyholders received in crop insurance subsidies in 2011.

$5,000: The amount the bottom 80 percent of policyholders collected in crop insurance subsidies in 2011.

More than 10,000: Number of individual farming operations that received federal crop insurance premium subsidies ranging from $100,000 to more than $1 million apiece in 2011.

10: Percentage of farm businesses that received 54 percent of all insurance subsidies in 2011.

$751 million: Amount in lobbying expenditures by the agribusiness lobby from 2008-2013.

$480.5 million: Amount the agribusiness sector has contributed to federal candidates during the past two decades, with two-thirds going to Republicans.

$33 million: Approximate amount spent by Monsanto (who has patents on 95% of the genetically modified seed market) on lobbying since 2008.

$7.2 million: Amount just 14 members of Congress and their spouses (net worth of up to $124.5 million)—each of them Republican—have received in farm subsidies since 1995. These Congress members all voted to continue farm subsidies from which they personally benefit, while allowing authorization for nutrition programs for low income individuals and families, including food stamps, to expire this year.