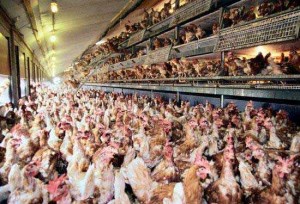 After years of sweeping the issue under the rug and hoping no one would notice, the FDA has now finally admitted that chicken meat sold in the USA contains arsenic, a cancer-causing toxic chemical that’s fatal in high doses. But the real story is where this arsenic comes from: It’s added to the chicken feed on purpose!

Even worse, the FDA says its own research shows that the arsenic added to the chicken feed ends up in the chicken meat where it is consumed by humans. So for the last sixty years, American  consumers  who eat conventional chicken  have been swallowing arsenic, a known cancer-causing chemical.

Until this new study, both the  poultry industry  and the FDA denied that arsenic fed to  chickensended up in their  meat.  The fairy-tale excuse story we’ve all been fed for sixty years is that “the arsenic is excreted in the chicken feces.” There’s no scientific basis for making such a claim… it’s just what the poultry industry wanted everybody to believe.

But now the evidence is so undeniable that the manufacturer of the chicken feed product known as Roxarsone has decided to pull the product off the shelves . And what’s the name of this manufacturer that has been putting arsenic in the chicken feed for all these years? Pfizer, of course — the very same company that makes vaccines containing chemical adjuvants that are injected into children.

Technically, the company making the Roxarsone chicken feed is a subsidiary of Pfizer, called Alpharma  LLC. Even though Alpharma now has agreed to pull this toxic  feed chemical off the shelves in the United States, it says it won’t necessarily remove it from feed  products  in other countries unless it is forced by regulators to do so. As reported by AP:

“Scott Brown of Pfizer Animal Health’s Veterinary Medicine Research and Development division said the company also sells the ingredient in about a dozen other countries. He said Pfizer is reaching out to regulatory authorities in those countries and will decide whether to sell it on an individual basis.”

But even as its arsenic-containing product is pulled off the shelves, the FDA  continues its campaign of denial, claiming arsenic in chickens is at such a low level that it’s still safe to eat. This is even as the FDA says arsenic is a carcinogen, meaning it increases the risk of  cancer.