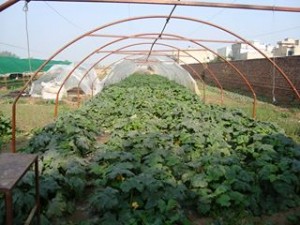 The production of vegetables in the country is currently limited to certaintime periods during the year due to seasonal variations. However, due to theinvention of modern agriculture production and storage techniques, there isan opportunity for growing a variety of vegetables in off-season as well. Inthis regard, two options can be considered: first is to store vegetables under an artificially created environment while the second best option would be togrow them off-season by tunnel farming.
Tunnel farming involves constructing greenhouses-hut-like structuresswathed in plastic that serve as cocoons for growing tomatoes, lettuce, peppers, carrots and bushels of other fruits and vegetables.The main objective of tunnel farming is to shield the crops from theelements and trap the heat of the sun, extending the growing season andincreasing production.The tunnels provide a microclimate around the crops that essentially foolsthem into thinking it is a different season than it really is,” agriculturespecialist explained.
They protect plants from extreme cold, wind, and rain, which can keep soilwet for days and keep farmers from cultivating it and they exclude or reduce pests and diseases. The main benefit is that the tunnels increase thetemperature when days lengthen as winter turns to spring, accelerating plant’s growth and enabling them to mature weeks before their counterpartsoutdoors. They also can keep the temperature up in the fall, extending thegrowing season and the plant’s production for weeks after outside plantshave stopped producing.
The tunnels can extend the growing season by up tofour months, with two months at each end.One difficulty is keeping the tunnels warm enough through the winter. The plants can actually freeze inside the tunnel, but the crop is not harmed aslong as it isn’t harvested until it thaws. It’s also challenging to control hightemperatures when the sun shines. Owners regulate the temperature byopening the tunnel doors, installing vents or lifting and lowering the sheetsof plastic. They have got to irrigate the plants, which do not get rain, but also
watch the humidity, which can promote disease. So, the biggest challenge isthe tremendous amount of managementTunnels can be large or small. Many high tunnels are about 90 feet long and20 feet wide, with wooden and aluminum frames. Unlike greenhouses,tunnels are covered with plastic, lighted only by the sun, and lack automatedheating and cooling systems. The high tunnel growing unit, a simplestructure with little environmental control equipment, less expensive to build.
They cost much less than greenhouses to build, usually about $4,000.Fruit & Vegetable Development Project (FDVP) of the Punjab Agriculturedepartment has installed 45 tunnels in six regions of the province. Theregions selected for tunnel farming included Lahore, Rawalpindi, Multan,Sargodha, Toba Tek Singh and Rahim Yar Khan and the framers of 45villages of these regions will be educated about cultivation of four vegetables, cucumber, tomato, green chili and capsicum, during off-season.
The tunnels were set up over an area of 12 marla for education purposesonly while hybrid seeds would be used for cultivation as production of theseseeds was more than normal seeds. On the other hand, the production of tunnel farming was 10 times more than normal farming, they added.Previously, tunnel framing was continued in only 1500 acre land of the province and now only in Okra and Sahiwal districts around 1500 acre landwas being used for this farming only.
So, vegetables tunnel farming has becoming a growing phenomenon inPakistan. High demand for the produce followed by high returns andimproved quality has motivated the farming community to enter into tunnelfarming business. However, it is felt that there is a demand for technicalknow-how of this field in order for people to enter this business. Theimmense potential for advisory / consultancy business in tunnel farmingcannot be ignored.
Tweet