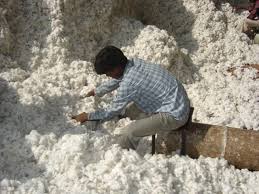 The country”s raw cotton export slumped by 67 percent during last fiscal year – 2012-13 (FY13), mainly due to shortfall in the cotton crop and higher prices in the domestic market. Traders said on Monday that during FY13 rising domestic demand, higher prices and contamination issues hampered the export of raw cotton, which posted a massive increase during FY12.

They said during the last fiscal year, cotton prices in the domestic market were higher than international market due to high demand and less production. Therefore, ginners and traders prefer to offload their stocks at local textile mills instead of export as local industry were offering a better price compared to world market. The country had also missed its cotton production target by about one million bales and overall output stood at some 12.9 million bales against the target of 14 million bales set by the government for 2012-13.

“The local cotton prices surged to some Rs 7,200 per mound due to shortfall in cotton, while the commodity prices in the international market were some 4-5 cent less than Pakistani market,” they added. Pakistani raw cotton is also facing challenges of cotton quality in the international market, which benefits India and some other counties, they said.

According to official statistics, the country”s cotton export witnessed a fall of 67 percent during last fiscal year. The country exported raw cotton worth $154 million during Jul-June of FY13 compared to $462 million in the corresponding period of FY12, depicting a decline of $308 million. In terms of quantity, with a decline of 64 percent, Pakistan”s raw cotton export stood at 0.5 million bales in FY13 compared to 1.5 million bales in FY12.

Traders said Bangladesh and Far East countries” are leading importers of Pakistani raw cotton while some quantity is also being exported to India and China. They said India is gradually capturing the international commodity market due to higher cotton production. India annually produces some 32-33 million bales and exports some 5 million bales.