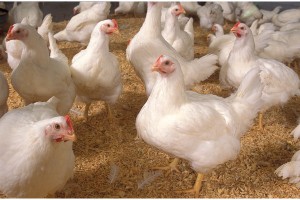 Government is committed to resolve the issues of poultry industry and enhance export of Halal processed food to Muslim countries as poultry sector can play an important role in uplifting of our economy,” MNA Hamza Shahbaz Sharif said this while inaugurating Pakistan Poultry Expo IPEX 2013 in Lahore today.

Acknowledging the role of poultry industry in job creation and strengthening the economy, he said government would support industry as thousands of people are attached and it ultimately affects the lives of citizens. While quoting the example of India and China he said despite the fact that both countries have cold war on different issues but their mutual trade touches $74billion while they are co-operating to increase it to $100 billion. Meanwhile, he assured that one-window operation will be provided to facilitate the poultry sector and issues such as clearance of maps for construction of farms and other bureaucratic hurdles will be removed.
He also urged poultry farmers to streamline the operations and develop poultry sector on modern lines. He opined that this sector should also set up small power plants using agricultural waste and bio-mass like Germany, where around 7,000MW is produced by using energy mix. Earlier, Chairman Pakistan Poultry Association (PPA) Khalil Sattar in his briefing highlighted the growth, challenges, potential and bureaucratic hurdles faced by poultry industry.
He said Pakistan is the 11th largest poultry producing country in the world with huge potential to benefit from growing demand of Halal food world over. He added that poultry sector is playing key role in poverty alleviation and provided approximately 1.7 million jobs to skilled, semi-skilled and unskilled workers deep into the rural areas; thereby reducing chances of huge urbanisation.
He said in Pakistan poultry industry faced several setbacks in past including bird flu influenza, GST, taxes and duty incentives for imported chicken products which encouraged imported chicken processed. Moreover, TPO demands to get drafted maps from their desired architectures and farmers have to spend double amount for the maps’ clearance.
For the growth of the sector he emphasised on withdrawal of zero rating of sales tax on processed and value-added products which has increased the cost of production. He also demanded removal of anomalies and added that import of machinery, equipment and implements should be free of advance income tax to reduce cost of investment.
He also highlighted examples of other countries where government support and incentives revived the industry. He said the UK VAT Act 1994 Schedule-8 Group-1 specifies food of a kind used for human consumption is Zero Rated.
The term food includes products eaten as part of a meal or as a snack. Food items are not only exempted but also zero rated and entitled to input tax credit. In USA too, many States exempt all food items whether processed or unprocessed from payment of VAT.