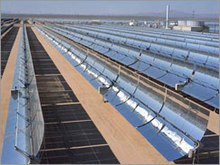 Green energy includes natural energetic processes that can be harnessed with little pollution. Anaerobic digestion, geothermal power, wind power, small-scale hydropower, solar energy, biomass power, tidal power, wave power, and some forms of nuclear power (ones which are able to “burn” nuclear waste through a process known as nuclear transmutation, e.g. an Integral Fast Reactor), and therefore belong in the “Green Energy” category). Some definitions may also include power derived from the incineration of waste.

Some people, including Greenpeace founder and first member Patrick Moore,[55][56][57]George Monbiot,[58] Bill Gates[59] and James Lovelock[60] have specifically classified nuclear power as green energy. Others, including Greenpeace[61][62] disagree, claiming that the problems associated with radioactive waste and the risk of nuclear accidents (such as theChernobyl disaster) pose an unacceptable risk to the environment and to humanity. However, newer nuclear reactor designs are capable of utilizing what is now deemed “nuclear waste” until it is no longer (or dramatically less) dangerous, and have design features that greatly minimize the possibility of a nuclear accident. (See: Integral Fast Reactor)

No power source is entirely impact-free. All energy sources require energy and give rise to some degree of pollution from manufacture of the technology. Some have argued that although green energy is a commendable effort in solving the world’s increasing energy consumption, it must be accompanied by a cultural change, namely one that encourages the decrease of the world’s appetite for energy, if it is to have the impact the world so eagerly anticipates.[63]

In several countries with common carrier arrangements, electricity retailing arrangements make it possible for consumers to purchase green electricity (renewable electricity) from either their utility or a green power provider.

When energy is purchased from the electricity network, the power reaching the consumer will not necessarily be generated from green energy sources. The local utility company, electric company, or state power pool buys their electricity from electricity producers who may be generating from fossil fuel, nuclear or renewable energy sources. In many countries green energy currently provides a very small amount of electricity, generally contributing less than 2 to 5% to the overall pool. In some U.S. states, local governments have formed regional power purchasing pools using Community Choice Aggregation and Solar Bonds to achieve a 51% renewable mix or higher, such as in the City of San Francisco.[64]

By participating in a green energy program a consumer may be having an effect on the energy sources used and ultimately might be helping to promote and expand the use of green energy. They are also making a statement to policy makers that they are willing to pay a price premium to support renewable energy. Green energy consumers either obligate the utility companies to increase the amount of green energy that they purchase from the pool (so decreasing the amount of non-green energy they purchase), or directly fund the green energy through a green power provider. If insufficient green energy sources are available, the utility must develop new ones orcontract with a third party energy supplier to provide green energy, causing more to be built. However, there is no way the consumer can check whether or not the electricity bought is “green” or otherwise.

In some countries such as the Netherlands, electricity companies guarantee to buy an equal amount of ‘green power’ as is being used by their green power customers. The Dutch government exempts green power from pollution taxes, which means green power is hardly any more expensive than other power.

In the United States, one of the main problems with purchasing green energy through the electrical grid is the current centralized infrastructure that supplies the consumer’s electricity. This infrastructure has led to increasingly frequent brown outs and black outs, high CO2 emissions, higher energy costs, and power quality issues.[65] An additional $450 billion will be invested to expand this fledgling system over the next 20 years to meet increasing demand.[66] In addition, this centralized system is now being further overtaxed with the incorporation of renewable energies such as wind, solar, and geothermal energies. Renewable resources, due to the amount of space they require, are often located in remote areas where there is a lower energy demand. The current infrastructure would make transporting this energy to high demand areas, such as urban centers, highly inefficient and in some cases impossible. In addition, despite the amount of renewable energy produced or the economic viability of such technologies only about 20 percent will be able to be incorporated into the grid. To have a more sustainable energy profile, the United States must move towards implementing changes to the electrical grid that will accommodate a mixed-fuel economy.[67]

However, several initiatives are being proposed to mitigate these distribution problems. First and foremost, the most effective way to reduce USA’s CO2 emissions and slow global warming is through conservation efforts. Opponents of the current US electrical grid have also advocated for decentralizing the grid. This system would increase efficiency by reducing the amount of energy lost in transmission. It would also be economically viable as it would reduce the amount of power lines that will need to be constructed in the future to keep up with demand. Merging heat and power in this system would create added benefits and help to increase its efficiency by up to 80-90%. This is a significant increase from the current fossil fuel plants which only have an efficiency of 34%.[68]

A more recent concept for improving our electrical grid is to beam microwaves from Earth-orbiting satellites or the moon to directly when and where there is demand. The power would be generated from solar energy captured on the lunar surface In this system, the receivers would be “broad, translucent tent-like structures that would receive microwaves and convert them to electricity”. NASA said in 2000 that the technology was worth pursuing but it is still too soon to say if the technology will be cost-effective.[69]