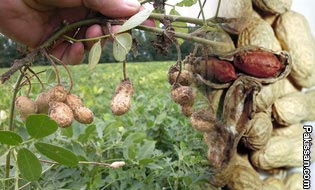 The plant grows low, spreads and then prostrates. Some erect types grow to a height of one foot. It produces yellow flowers and a convoluted pod with 3-4 edible seeds in each chamber of its underground pod. These are long, cylindrical and swell over the seed which is valued as a raw material for hydrogenated oil industry.

The ‘crunchy nut’ is eaten fondly after roasting it by children and grown-ups as a dry-fruit throughout the year. But its demand increases in winter, when every one likes to have it.

Peanut is now grown in more than 40 countries but its main producers are, China, the USA, Argentina, Brazil, Mayanmar (old Burma), India, Indonesia, Nigeria, Senegal and Sudan. In Pakistan, it is cultivated mainly in rain-fed (barani areas) of Punjab and also in irrigated areas of the NWFP and Sindh.

Climate/soils: Groundnut is a warm season crop and the plant requires ample water, especially at its fruiting time. It does well in fairly rich, open, and sandy soils with good drainage for development of underground pods. It is a heavy feeder of calcium and a pH of 6.0 of 6.0 to 6.5 is most suited for its cultivation.

Production: The main peanut producing districts in Punjab are, Attock, Chakwal, Khushab, Mianwali, Bhakkar and Bhawalnagar. In the NWFP, it is produced in Seabi, Kohat and Khurran districts. In Sindh, Khairpur, Ghotki, Sukkur, and Sanghar districts are its main producers. Province-wise, the area and production during the year 2000-01 to 2003-04 for the irrigated and un-irrigated areas is as follows: Area in ‘000’ hectares Source: Agricultural Statistics of Pakistan (2000-01 to 2002-03).

The area and production in Punjab is bigger because crop is cultivated both in ‘barani’ (rain-fed) and irrigated areas. Locally developed and exotic varieties are cultivated in both of the areas with a further potential in production.

The number of varieties under cultivation in NWFP and Sindh is limited and there is a need for developing of new varieties. The yield per hectare in Sindh during the years 1989-70 and 1990-91 was quite higher. Areas in Thatta, Badin and Hyderabad could further be explored for peanut cultivation. Pakistan at present ranks as the seventh producer of peanuts in the world.

Uses: Groundnut has a variety of uses. It is primarily grown for its high oil content for making cooking oil. Seedcake, after extraction of oil is fed to livestock because of its residual protein value and is also used as manure. The deodorised and decolourised oil is used to make ‘margarine’ (a food like butter). The nutty nut is used in preparing vegetable dishes. The seed is used in bakery products.

Roasted ( in oil or hot sand ) the seed is sold in small packets and is used in ‘nimko’ mix. It is in great demand. Roasted ‘kernels’ are served by housewives with other dry fruits before guests at tea time.

Peanut oil is used for making soaps, cosmetics and lubricants. Oil emulsion are nutrient and used for softening pharmaceutical products. Being a leguminous plant, nitrogen is fixed by bacteria in root nodules of peanut crop. Peanut is therefore, given a proper place in the ‘crop rotation programmes’ to maintain soil fertility. Leaves of the plant are fed to cattle.

In view of its great importance, the crop needs attention for evolving its new varieties in the respective areas of its production.