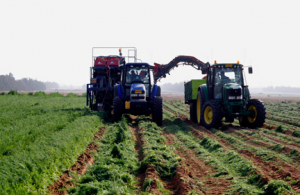 A world-class agriculture research and high-tech farming training institute is to be set up in Gujarat in collaboration with Israel government. This was stated by chief minister Narendra Modi while inaugurating a national convention on ‘The next frontier of agri-business and technology’ at Mahatma Mandir on Monday.

Modi announced that the state will hold a ‘Gujarat global agricultural event’ once in every three years on the lines of the world’s largest agricultural fair in Israel. He said during the biennial vibrant Gujarat summit that agriculture is given importance in Gujarat too.

Calling upon the farmers to take the country to such a height that they could cater to all the agricultural needs of Europe, Modi pointed that it would require farmers’ pressure group to force the rulers to change the nation’s agriculture related policies.

The two day event is being attended by envoys from seven nations including Israel, Holland and Chile along with 2,000 delegates from state public sector undertaking and agriculture related fields from 11 states of the country. An agricultural fair has also been arranged at the venue.

A white paper on Gujarat’s achievements in agriculture was released on the occasion. Modi claimed that in a revolution of sorts, the state made great endeavors in rainwater conservation and water resource management.