With the continuing growth in demand for fresh produce, Nebraska farmers are exploring ways to extend their growing season.

Today, more farmers are using hoophouses, or high tunnels, according to Ryan Pekarek, who ownsPekarek’s Produce in Dwight and is president of the Nebraska Fruit and Vegetable Growers Association.

High tunnels are similar to greenhouses, but much less expensive to build and maintain. Another distinction is that plants grown in high tunnels are actually rooted in the ground, where those in greenhouses are commonly grown in containers. 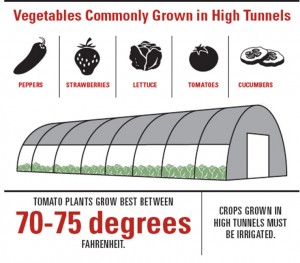 Covered in plastic and heated with available sunlight, hoophouses are quite effective in lengthening the season for several types of produce.