Agribusiness initiatives often harm as much as they help. Join us from 1-3pm BST on Thursday, 4 April, to discuss how to bring about positive development outcomes in the agribusiness sector 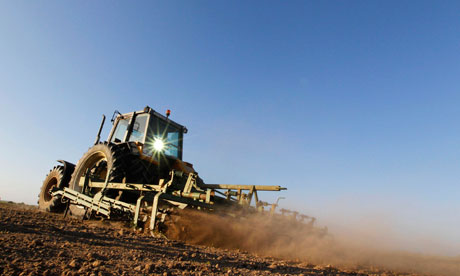 How can agribusiness offer a way out of poverty for developing countries? Photograph: Pascal Rossignol/Reuters

The Food and Agriculture Organisation of the United Nation (FAO) defines agribusiness as “the collective business activities that are performed from farm to fork“, in other words, the links between farmers and consumers, localy and globally. On that basis alone – that produce makes it past the farm gate and farmers wages come from their crops – agribusiness could hold the promise of a way out of poverty for many developing countries.

But delivering on that potential is still a long way off. Africa, for example, could create a trillion dollar food market, but the market’s current size falls short by some measure, at $313bn (£208bn), according to a World Bank report. The report also found that due to a lack of growth, trade and productivity, agriculture and agribusiness have been “losing in the competitiveness race.”

Profit, growth and productivity are also not enough to make agribusiness work for development, and often initiatives aimed at stimulating these factors can harm more than they help.

In the rush to allocate land for agribusiness, acquisitions can threaten livelihoods and food security as farmers produce crops for the market and not for their own consumption. Other studies find industrialisedfarming methods can make food less nutritious, pollute water reserves, often leading farmers into a food production v pollution trade-off.

So how can agribusiness initiatives work to promote sustainable growth, while minimising damage to the environment and to farmers’ lives and livelihoods? What is the role of genetically modified crops? And does the ‘revolution’ which sees supermarkets control 60 to 70% of food sales and which is fast spreading across the developing world run counter to the objective of equitable development? Join our panel on Thursday, 4 April to discuss these questions and others.