About 10 tailors with old, noisy sewing machines stitch fabrics under the canopy of the shops in the old town of Malawi’s capital, Lilongwe, occasionally look up to reveal forlorn faces.

Osman Kabere says he has been making suits since 1978, but gone are the days when his business gave good returns.

At an expansive flea market nearby, the mood could not be more different.

It is vibrant, noisy and crowded with customers hunting for bargains and cheap clothes.

It is the key market from where most Malawians living in the city buy their clothes and shoes – all of them already worn in Europe and north America and then donated by their first owners to charity shops.

One customer, Grace Gondwe, tells me it is great to be able to buy high street designer labels at an affordable price.

“When you buy them they are durable and unique,” she says.

“When you buy clothes from the [local] shops you’ll find many people wearing the same clothes.”

Anne Soy reports from a second-hand clothes market in Malawi

For Mr Kabere, competition from clothes imported from China, selling in shops at slightly higher prices than those at the flea market, is also a factor.

“For about five years, since the Chinese suits started coming and also because of the second-hand clothes, business is going down and people prefer to go to the market,” says Mr Kabere.

“The Chinese ones are cheaper than ours because when you get the fabric from the shop and when we charge our labour – it’s about $60 [per suit] compared to the Chinese is $24 – that’s a big difference for one suit.

“So people prefer to go to the Chinese.”

A spokesman for Malawi’s Ministry of Industry and Trade, Wiskes Nkombezi, admits the second-hand clothes industry is “a double-edged sword”.

“A lot of the people in Malawi are poor and for them these are cheaper clothes that they can afford.”

But cheap Asian imports have also benefited the economy, especially the fabric which sells in shops for a fraction of locally-manufactured cloth, he says.

This is because under the Africa Growth and Opportunity Act (Agoa), a trade agreement set up in 2000 which removed export duties on African goods to the US, Malawi was allowed to use foreign fabric to make garments.

However, on the ground there is little evidence that the US trade deal has had an impact on the livelihoods of Malawians – and many companies that had invested in the clothing industry for export have closed down in recent years.

This is because of uncertainty over the extension of the terms of Agoa. It was due to end in 2008 and was extended by seven years, but by the time the decision was reached many companies had retreated. The special provision allowing companies to use foreign fabrics was also extended, but expired last year.

The local textile industry still benefits under Agoa until 2015.

Thousands of small-scale cotton farmers sell much of their produce to Malawi’s main textile manufacturer, Mapeto Ltd, which directly employs about 1,500 people.

But Mapeto’s general manager, Martin Mpata, fears competition from cheap fabrics imported from the Asia could mean an uncertain future for locally-made cloth.

“If it continues and companies close, then there will be no employment and where will people go?”

But for the traders at the Lilongwe flea market, with their clothes displayed inside the wooden stalls lined up on both sides of the dusty road, there are no such concerns.

Hawkers carrying up to five items of clothes crowd the 10m-wide road that separates the stalls as vendors call out to customers.

All manner of items is available here – from winter boots to summer dresses, jackets to undergarments.

Weison Gondwe, who specialises in underwear, has on display five rows of assorted brassieres on all four sides of his stalls.

A woman sorts through the heap of underwear on the floor of his stall, picks three of them and pays.

She politely declines to talk to the BBC, folds her shopping and tucks it inside her brown handbag, before hastily leaving the stall.

Mr Gondwe says his business is good: “I used to sell radios but that was not a profitable business. 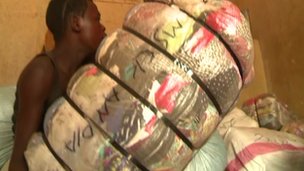 Second-hand clothes are sold to vendors from warehouses in bails

“That’s why I switched to selling underwear and this is a much more rewarding venture.”

His customers are not able to try the clothes before buying them: he does allow his customers to swap goods but will not give refunds.

“The main problem I have is that some customers will purchase underwear; they’ll go home and realise they are either too small or too big.”

His neighbour, Annie Gondwe, owns a stall that sells used skirts, which are wrinkled and evidently old.

Like the other vendors, she buys the used garments from a warehouse where the clothes arrive in bales sorted by type from ports in South Africa and Mozambique.

Ms Gondwe says that business is best at around end of the month, when customers have money.

“I have been in this business for six months and the money is good. I can say I am making a good profit,” she says, with a proud look.

The second-hand clothes are without a doubt putting smiles on the faces of a majority of Malawian consumers and traders.

For Mr Kabere there is a silver lining: Tailors gain business from people wanting alterations – and especially from customers who discover that Chinese-made clothes are not always long-wearing.

“When they buy those clothes from the Chinese they bring them to us to fix. They are not up to standard compared to ours,” he says.