How to Grow Sunflower 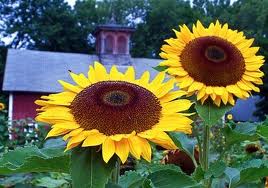 How to Grow Sunflower

Sunflowers work well as a full season crop in rotation with corn, soybeans and/or sorghum.  As a double crop after wheat, sunflowers are an equally good choice with soybeans for the southern half of Missouri, and are a very good choice for the northern part of the state.  Regardless of whether they are grown as a single crop or double crop, sunflowers should not be planted in the same field more than once every three to four years.

Sunflowers, like soybeans, do not leave very much residue, so on erosive fields consider seeding a fall cover crop after sunflowers.  Sunflowers generally grow best on well drained soils, are tolerant of clay loam or silty clay loam soils and perform comparatively well on sandy loam soils.  They should not be grown on wet soils, but may be a good choice for bottom ground that doesn’t dry out until early summer, since the sunflowers can be planted relatively late.

Most major seed companies have several varieties of sunflower available.  Almost all commercial varieties of sunflowers are hybrids, so new seed should be purchased each year.  Companies have been actively developing new hybrids of sunflowers with better disease resistance and higher yields.  Special types with unique seed oil characteristics have been developed through conventional plant breeding (not biotech), including “NuSun” sunflowers, that are higher in oleic acid in their seed oil than are conventional oilseed sunflowers.  Reflecting market demands, many companies are releasing NuSun varieties, that are considered mid-level in their oleic acid content (there are also “high-oleic” varieties available that are desired for certain food and industrial uses).  Variety test comparisons in Missouri have shown a considerable difference in yield of available varieties, but similarity in height and maturity.  For the birdseed market, oil percentage does not matter, but selecting a variety with high oil content may be worthwhile for a vegetable oil market.  To get the latest information on variety performance in Missouri, and for a list of seed sources, refer to the Jefferson Institute publication on sunflower varieties (phone 573-449-3518).

Sunflowers should be planted 1 to 1 1/2 inches deep.  Row spacing studies have shown that sunflowers do not yield better in narrow rows, whereas wide rows are preferable to allow cultivating for weeds or use a row crop header.  Sunflowers are not particularly sensitive to seeding rate, since head size (and seed number) per plant will increase in a thinner stand.  Seeding rates can be from 15,000 to 25,000 plants per acre.  Sunflower seeds vary in size, so seeding rate based on weight must take into account seed size, but will be  roughly 3 to 4 pounds per acre.  Number 2 sunflower seeds are largest, while number 5 are smallest.  Most sunflower seed available is sized as a 3 or 4.  Size of the seed can affect what type of planter modifications are necessary, such as buying new seed plates or finger pickups.

Planting sunflower can begin anytime after soils have warmed to 50 degrees F. (April) through mid-July.  It’s not a bad idea to plant sunflower on a couple of different dates to reduce risk and spread out labor load.  Planting early can allow sunflower to be harvested before corn and soybeans, and will likely avoid any bird damage.  Planting late can allow planting after other crops are done, and is less likely to have damage from sunflower moth.  Double crop planting after wheat works well with sunflower, and can be done in the northern part of Missouri since sunflower is more frost tolerant than soybeans in the fall.