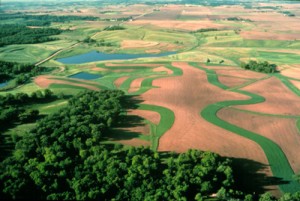 Contrary to claims by Monsanto and government conspirators, we can indeed meet the world’s hunger without the use of genetically modified seed and manufactured chemicals. Bumper crops of rice, potatoes, and wheat are being grown in India using methods of Agroecology.

Agroecology is a dynamic agricultural approach that uses scientific information and local knowledge to produce practical methods that are low-cost and ecologically sound. This is quite a contrast to the “one size fits all” approach of GMO crops and chemical inputs being peddled by Monsanto and friends.

A particular kind of agroecology called System of Rice Intensification (SRI) is being applied in India to produce the record-setting yields.

SRI was developed in the 1980’s in Madagascar by Fr. Henri de Laulanié, S.J. He sought to improve their agricultural systems without being dependent on external inputs, as poverty was a widespread problem. Fr. Laulanié established a non-governmental organization that began working with the Cornell International Institute for Food, Agriculture and Development in 1994.

Now, SRI “is being hailed as one of the most significant developments of the past 50 years for the world’s 500 million small-scale farmers and the two billion people who depend on them.”

SRI is basically a change in the management of plants, soil, water and nutrients for irrigated rice. Seedlings are planted at a younger stage and spaced farther apart to encourage greater root and canopy growth and to increase yield per plant. These principles have more recently been applied to other crops like wheat, sugar cane, and millet, where it is known as System of Crop Intensification (SCI).

Water is carefully managed and applied at precise stages. Organic matter such as composted manure is routinely introduced to maintain tilth and microbial development. Even the process of weeding contributes to soil improvements. A simple rotary hoe used at certain times puts decomposed weeds back into the soil, aerates the soil, and stimulates root growth by root pruning.

It is basically using resources more wisely. SRI and SCI offer a long-term, sustainable future of agriculture for no extra cost, instead of patented GMO seeds and proprietary chemicals to enslave farmers in debt.

“Farmers use less seeds, less water and less chemicals but they get more without having to invest more. This is revolutionary,” said Dr Surendra Chaurassa from Bihar’s agriculture ministry. “I did not believe it to start with, but now I think it can potentially change the way everyone farms. I would want every state to promote it. If we get 30-40% increase in yields, that is more than enough to recommend it.”

Movements are growing around the world to embrace sustainable, efficient, and localized systems of agriculture. There is growing resistance to the efforts of Monsanto, western governments, and billionaire bankrollers to shove GMO crops down the world’s throat. The realities of local economies and the increasing knowledge of informed citizens will overcome the GMO juggernaut.