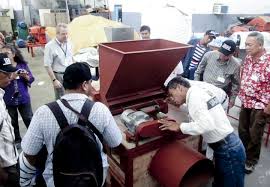 After the intensive testing and evaluation of the development prototype, IRRI’s downdraft rice hull furnace (dRHF) is now on its way to being commercialized.

Modifications based on results and observations from testing under actual field conditions have been integrated into the prototype and this has resulted in a version for commercialization in the Philippines.

Farmers dry their paddy and shelled corn in the flatbed dryer, which has a 6-ton capacity, with the dRHF as a heat source.

The latest unit installed for commercial operation is in the Mallillin Rice Services (MRS) center in Barangay Sisim, Peñablanca, Cagayan Province, at the foot of Sierra Madre mountain range. MRS was launched in March 2012.

Experts first assumed that, once the sun is out, the farmers will move their produce outside for sun-drying. But the farmers opted not to, and the dryer at the MRS operated for days and processed more than 617 bags of paddy and 124 bags of shelled corn.

IRRI provided technical assistance in the construction and assembly of the dRHF and flatbed dryer, through the IRRI-ADB RETA 14/15 postharvest project (funding for which will end in 2012).

To sustain outscaling of the dRHF technology, strategic manufacturers will be identified and given training on its manufacture, curing, repair and maintenance, timer/control management, and after-sales service.

The dRHF is a new generation of rice hull furnace that resolved the problems associated with its predecessor, which include smoky operation, unstable heat supply, and heat stress to furnace attendant.

With the dRHF, smoke is generated only during the initial firing of the rice hull. Average carbon monoxide (CO) emission is at 15 ppm—way below the allowable limit of 30 ppm.