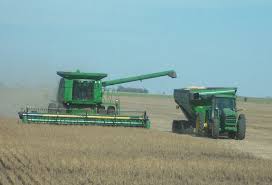 Kalmbach Feeds, Inc., has contracted with TruStar Energy to build a public Compressed Natural Gas [CNG] fast-fill station near its Wyandot County manufacturing plants and distribution center. Kalmbach Feeds is a leading innovator in the animal feed industry, producing and distributing nutritional products throughout the eastern half of the United States.

The station is part of a new venture, Kalmbach Clean Fuels, LLC, and will support Kalmbach’s new CNG-powered feed distribution trucks. Strategically located near the intersection of US 30 and US 23, the new station will allow other CNG fleets and individual vehicle owners to take advantage of the benefits of the clean-burning, domestically produced fuel.

Kalmbach Clean Fuels will be the first public CNG station in rural Ohio and will also host a maintenance garage for all CNG vehicles.

Kalmbach’s Director of Distribution, Tim Rausch, was charged with the task of developing a fueling strategy that best utilizes company resources, with the intent of transitioning away from foreign oil.

“Our president, Paul Kalmbach, wanted a ‘made in America’ solution to our fueling needs, and with natural gas – we believe we found the right solution.”

Company founders Milton and Ruth Kalmbach envisioned innovative ways to produce and distribute animal feeds when they began Kalmbach Feeds in 1963. Fifty years later, that innovative spirit led the company to look at CNG to power their vehicles – and to offer that infrastructure to the public.

Paul Kalmbach believes that American natural gas has the potential to change the world’s energy paradigm and is leading the Kalmbach Companies to be an integral piece of this new solution.

“Regarding CNG, there has always been the discussion of whether to buy CNG trucks – or wait until there were fueling stations available – the classic ‘chicken or the egg’ dilemma. The trucking industry needs leaders who are willing to invest in new technology,” said Rausch, adding, “Kalmbach Feeds is stepping forward to develop that infrastructure to move the industry forward.”

Rausch said that Kalmbach Feeds is planning to transition the entire fleet to either dedicated CNG or a combination of CNG / dual-fuel powered vehicles within 10 years.

TruStar Energy LLC is looking for commercial fleets interested in transitioning their fuel supply from oil to natural gas. TruStar Energy provides a suite of solutions making the transition as simple and easy as possible for the customer. With station builds throughout the US and Canada, TruStar Energy is a recognized leader in providing CNG infrastructure and CNG fueling solutions.