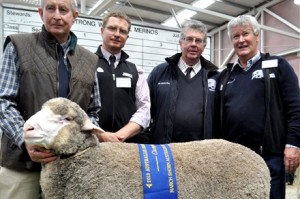 ROSS Wells was in no hurry to see his prized Poll Merino ram Willandra Desmond head out the front gate, but an offer of $35,000 from across the Tasman Sea was too good to pass up.

At the Australian Sheep and Wool Show at Bendigo in July, an interested party of New Zealand sheep breeders had blood taken from Desmond for a foot score test.

Once he was given the all clear in that test, he became hot property to New Zealand breeders.

Mr Hodgson suggested the Satterthwaites make the trip to Jerilderie in NSW to inspect Desmond for themselves and meet the breeders Ross and Irene Wells, Willandra stud.

“Desmond is easily the best Poll ram we have ever seen and possibly the best Merino,” Mr Satterthwaite said.

“His true dual-purpose attributes are outstanding with his constitution and wool is unfaultable- he is an impact ram,” he said.

Mr Satterthwaite said Desmond’s conformation, top-line and hindquarters were exceptional also, and it was a bonus that he had an extremely good foot score tolerance of 1-2.

Vendor Ross Wells said he couldn’t talk the Satterthwaites out of the sale.

“I would have been happy for them to buy semen because we have become quite fond of Desmond,” Mr Wells said.

The Wells’ have already sold over 1000 semen doses from Desmond throughout Australia.

Desmond has just cut his two-teeth, and had a fibre-diametre of 19-micron, a standard deviation of 2.7-micron, a co-efficient of variation of 14.2pc, and comfort factor of 99.8pc.

“Des has quite a personality- he has become well known and has had great show success,” Mr Wells said.

His first big win for the year was at the Hay Sheep Show in June when he won the prestigious Australian Champion Hogget Ram of the Year title.

In July he was sashed the champion all-purpose hogget at the Australian Sheep and Wool Show at Bendigo ahead of 120 entrants from across the country.