Home / Agri Punjab / Lettuce Gaze Upon the Future of Agriculture

Lettuce Gaze Upon the Future of Agriculture

Florida has its oranges, Georgia has its peaches, and California has its lettuce. These leafy greens are the Golden State’s biggest vegetable crop, bringing in $1.6 billion annually. Problem is, they require a lot of attention to raise properly. Historically, California has relied of its abundant, affordable work force. But with that labor pool shrinking and foreign competition increasing, lettuce farmers in America’s Salad Bowl are facing rising labor costs and worker shortages. And that’s where the fully automated Lettuce Bot comes in. 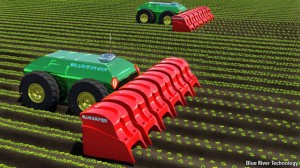 The problem is put simply by Stavros G. Vougioukas, professor of biological and agricultural engineering at the University of California, Davis. “We need to increase our efficiency,” he told the Economist. “But nobody wants to work in the fields.” And since all those acres of lettuce won’t thin, weed, and harvest themselves, a pair of Stanford engineers, Jorge Heraud and Lee Redden, developed a robot to do the work that humans wouldn’t.

The Lettuce Bot is a tractor-towed device that images a row of plants as it rolls past and compares the visual data against a million-point database of other pictures of lettuce (which must have been super exciting to compile) using a custom designed computer-vision algorithm. It’s reportedly 98 percent accurate, and if it spots a weed or a lettuce plant in need of thinning (lettuce will remain dwarfed if planted too close together), the Lettuce Bot gives it a shot of concentrated fertilizer, killing the offending plant while improving the growth prospects of the rest. Incredibly, even though it dawdles through the fields at just 1.2 mph, the Lettuce Bot can still thin a field as accurately and as quickly as 20 field hands.

And the Lettuce Bot is only the start. Farmers across the country are finding it harder and more expensive to find enough human workers and are starting to look to robots to augment the labor force. In response, both private and public ventures have started pouring money into agrimech (agricultural mechanization) technology. As such, research is advancing quickly. Robots are being outfitted with suites of EO sensors, nimble manipulator arms, GPS-guidance, and more processing power than the robots in Runaway. 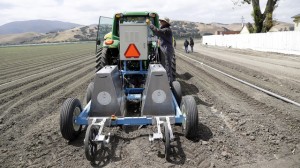 Lettuce Gaze Upon the Future of Agriculture

Other harvesting-edge agrimechs include an automated tulip-bulb planter, the seedling transplanter at the Vineland Research and Innovation Centre in Ontario, Canada, as well as an integrated mushroom harvester/trimmer/packager and a potted plant packer; the Harvest Vehicle HV-100 by Harvest Automation that shuttles potted plants around nurseries; and John Deere 7760, king of the mechanized cotton pickers.