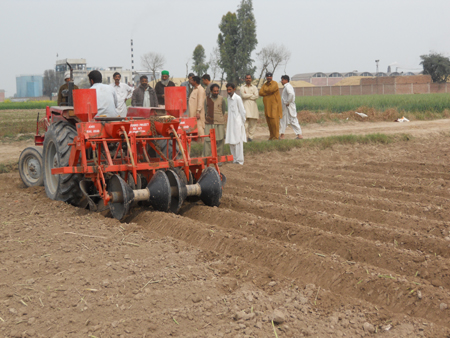 After nitrogen (N), phosphorus (P) is the second plant nutrient most widely deficient both in normal (82 – 90 %) and salt-affected soils (93 %) of Punjab. Therefore, the plant demand is replenished through fertilization but efficiency (recovery by the plant) of none of the existing fertilizers applied through broadcast, exceeds 20 % owing to the unavoidable chemical reactions in alkaline calcareous soil condition that convert a lion share (80 %) of applied P into forms unavailable to plant. The lower efficiency of existing P fertilizers demands their increased use which is becoming practically difficult due to the present price hike in P fertilizers and withdrawal of subsidies. The higher prices of phosphate fertilizers will reflect into very low applications of P to crops and result in a drastic reduction in yields of field crops in near future.

This will aggravate the already tense situation to meet the demand of the masses for food stuff particularly cereals. This scenario can not be changed with the existing expensive/ inefficient P sources (common fertilizers) and methods of application. The commonly used broadcast method before sowing is wasteful as it greatly limits the usefulness of P fertilizer due to its exposure to more soil surface area where maximum P fixation takes place before it is taken up by the crop. However, banding of P fertilizer through a seed-cum-fertilizer drill can save 70 % of the fertilizer that will result in huge reduction in expenditure incurred on their import.