Livestock business gets a boost 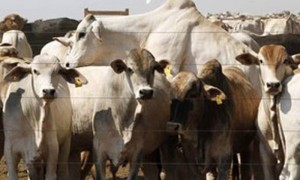 Livestock business gets a boost

These are Japan International Cooperation Agency (JICA) and the United States Agency for International Development (USAID). JICA has signed an agreement with Sindh government to help revive its livestock potential under a five-year project. The project marks the beginning of implementation of a livestock development master plan jointly worked out by the provincial government and Japanese experts. The plan will cover the period until 2020, based on the scrutiny carried out from 2011 to 2012.

The USAID has helped the Punjab government by preparing a draft of a new law called Punjab Animal Welfare Act, 2013, on behalf of the livestock and dairy development department. It recently organised ‘a dialogue’ among the stakeholders on the pros and cons of the new law in Lahore. The existing law, Animal Protection Act, promulgated by the British in 1822, has become outdated.

Statistics show that Sindh has 6.92 million cattle, 7.34 million buffaloes, 3.96 million sheep, 1.26 million goats and 278,000 camels while the accumulated livestock holdings of the province stands at 21 per cent of the country. According to Japanese experts, the huge size of animal population is in itself a significant sign of the great potential for the livestock development in terms of high production capability. On country-wide basis, the population of cattle was the largest at 38.3 million during 2012-13 — of buffaloes it was 33.7 million, of sheep 28.8 million and of goats 64.9 million.

Meanwhile, a land measuring 2,500 acres has already been earmarked in district Thatta, about 230kms from Karachi, for setting up Bhambhore dairy and meat processing zone by Sindh’s livestock department. Sindh Board of Investment in collaboration with the department would undertake the investment part of the project. The government has started giving some attention to this sector but no big investment, much less from abroad, has been seen in dairy, beef, mutton sub-sectors of livestock.

Most of the livestock production system in Pakistan is age-old and subsistence oriented. Sire (bull) is being bred with low genetic potential. The breed with best potential such as Sahiwal cow and Nili-Ravi buffalo are rarely found on the farms of small and middle-class farmers who contribute a bigger share of cattle-heads. These have, in fact, become endangered species. There is need to save and exploit the genetic potential of the high yielding breeds.

The budget documents say that livestock is a newly emerging economic sector with high potential in terms of profitability. Farmers earn about 30 to 40 per cent of their income from livestock. Some government initiatives planned in livestock sector are aimed at enhancing production and marketing of livestock products in Layyah, Mianwali, Khushab and Bhakkar, restructuring and re-organisation of breeding services and strengthening of Buffalo Research Institute at Pattoki.

A by-product of the livestock sector is bio-gas and China has set up 11 million biogas plants by using cattle’s manure. But Pakistan has hardly 3,000 plants. Based on the size of cattle and other animal population, Pakistan can have as many as a million biogas plants. Punjab’s chief minister has, however, taken the initiative on this count. He has launched a project aimed at developing economical biogas plants. Apart from clean fuel, these plants also produce organic fertiliser as a by-product. Another by-product is leather and leather products. Its exports earned $1.1billion during 2010-11 fiscal year which amounted to 4.4 per cent of the total exports.

Historically, livestock has been mostly pursued by small farmers to meet their needs of milk, meat, eggs, food security and cash income on daily basis. Some 30-35 million people in rural areas depend directly or indirectly on livestock for their livelihood. Pakistan happens to be the fifth-largest milk producer in the world but has yet to develop this sub-sector as a large-scale industry and to make it one of the leading foreign exchange earners. The milk production, however, increased by 3.2 per cent and meat 4.5 per cent during 2012-13 as compared to corresponding period last year.

Livestock contributed approximately 55.4 per cent to the agricultural value and 11.9 per cent to the GDP during 2012-13, against almost similar performance a year ago. Gross value addition of the livestock sector at constant cost factor has increased from Rs735 billion (2011-12) to Rs756 billion (2012-13), showing an increase of 2.9 per cent as compared to previous year.

In the wake of the passage of 18th constitutional amendment, the federal ministry of livestock and dairy development was abolished on April 5, 2010 and the subjects of animal health and production were devolved to the provinces. The technical staff of the ministry was initially attached with the commerce ministry and later with livestock wing of the newly created ministry of national food security & research in February 2012. The ministry is redefining its role under its new mandate to serve as catalyst in the development of livestock in the country.

The future plan of the ministry for livestock sector is to achieve five per cent growth in meat and eight per cent in milk production, which are currently around three per cent, by discouraging subsistence livestock farming and encouraging market-oriented and commercial farming covering the entire value chain from farm to plate.

Besides, the ministry plans to promote diversification of livestock products, help the sector play a leading role in the global halal food market and control trans-boundary animal diseases of trade and economic importance.