Those not satisfied with the third-party grid approach to green energy via the power grid can install their own locally based renewable energy system. Renewable energy electrical systems from solar to wind to even local hydro-power in some cases, are some of the many types of renewable energy systems available locally. Additionally, for those interested in heating and cooling their dwelling via renewable energy, geothermal heat pump systems that tap the constant temperature of the earth, which is around 7 to 15 degrees Celsius a few feet underground and increases dramatically at greater depths, are an option over conventionalnatural gas and petroleum-fueled heat approaches. Also, in geographic locations where theEarth’s Crust is especially thin, or near volcanoes (as is the case in Iceland) there exists the potential to generate even more electricity than would be possible at other sites, thanks to a more significant temperature gradient at these locales.

The advantage of this approach in the United States is that many states offer incentives to offset the cost of installation of a renewable energy system. In California, Massachusetts and several other U.S. states, a new approach to community energy supply calledCommunity Choice Aggregation has provided communities with the means to solicit a competitive electricity supplier and use municipal revenue bonds to finance development of local green energy resources. Individuals are usually assured that the electricity they are using is actually produced from a green energy source that they control. Once the system is paid for, the owner of a renewable energy system will be producing their own renewable electricity for essentially no cost and can sell the excess to the local utility at a profit. 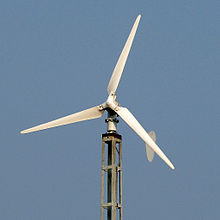 Renewable energy, after its generation, needs to be stored in a medium for use with autonomous devices as well as vehicles. Also, to provide household electricity in remote areas (that is areas which are not connected to the mains electricity grid), energy storage is required for use with renewable energy. Energy generation and consumption systems used in the latter case are usually stand-alone power systems.

Usually however, renewable energy is derived from the mains electricity grid. This means that energy storage is mostly not used, as the mains electricity grid is organised to produce the exact amount of energy being consumed at that particular moment. Energy production on the mains electricity grid is always set up as a combination of (large-scale) renewable energy plants, as well as other power plants as fossil-fuel power plants and nuclear power. This combination however, which is essential for this type of energy supply (as e.g. wind turbines, solar power plants etc.) can only produce when the wind blows and the sun shines. This is also one of the main drawbacks of the system as fossil fuel powerplants are polluting and are a main cause of global warming (nuclear power being an exception). Although fossil fuel power plants too can made emissionless (through carbon capture and storage), as well as renewable (if the plants are converted to e.g. biomass) the best solution is still to phase out the latter power plants over time. Nuclear power plants too can be more or less eliminated from their problem of nuclear waste through the use of nuclear reprocessing and newer plants as fast breeder and nuclear fusion plants.

Besides the greening of fossil fuel and nuclear power plants, another option is the distribution and immediate use of power from solely renewable sources. In this set-up energy storage is again not necessary. For example, TREC has proposed to distribute solar power from the Sahara to Europe. Europe can distribute wind and ocean power to the Sahara and other countries. In this way, power is produced at any given time as at any point of the planet as the sun or the wind is up or ocean waves and currents are stirring. This option however is probably not possible in the short-term, as fossil fuel and nuclear power are still the main sources of energy on the mains electricity net and replacing them will not be possible overnight.

Several large-scale energy storage suggestions for the grid have been done. This improves efficiency and decreases energy losses but a conversion to an energy storing mains electricity grid is a very costly solution. Some costs could potentially be reduced by making use of energy storage equipment the consumer buys and not the state. An example is car batteries in personal vehicles that would double as an energy buffer for the electricity grid. However besides the cost, setting-up such a system would still be a very complicated and difficult procedure. Also, energy storage apparatus’ as car batteries are also built with materials that pose a threat to the environment (e.g. sulphuric acid). The combined production of batteries for such a large part of the population would thus still not quite environmental. Besides car batteries however, other large-scale energy storage suggestions for the grid have been done which make use of less polluting energy carriers (e.g. compressed air tanks and flywheel energy storage).