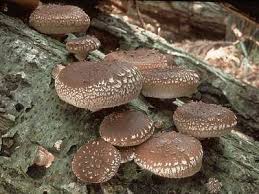 AN edible mushroom is a delicacy, which is relished as a popular and costly food. In the developed countries, mushrooms have become an important horticultural crop.

Production of mushroom is rapidly increasing throughout the world. It is available all the year round and is served as a delicacy with other table dishes.

There are about 6,000 different species of mushrooms of which at least 1,290 are edible. During 2003, about 1,500 million kilogramme of Hygracircus, Shiitake and Pleurotus types of mushrooms were produced and consumed in the world. About 20,000-25,000kg of morels (Morochella esculenta), which are normally found in Swat and Kaghan valleys and other hilly areas of the country, are exported annually.

Mushrooms have been used as food and medicine since time immemorial. Their cultivation on extensive scale can help solve problems of protein shortage. It has been found that edible mushrooms posses high percentage of protein, amino acids, and vitamins B-complex and such other biochemical compounds.

This vegetable is also a rich source of dietary fibre and the quantity present in it is much higher than crude fibre. The protein value of mushroom is double that of cabbage, potato and asparagus, four times that of tomatoes and carrot and six times that of oranges.

The protein value of crisp mushrooms has been found to be 40-45 per cent comprising all essential amino acids. Mushrooms are a source of niacin (0.4g) and riboflavin (0.4mg). The fungus is a good source of trypsin enzyme. It is also rich in iron, copper, calcium, potassium, vitamin D, and folic acid. Mushrooms are valuable health food, which are low in calories, high in vegetable proteins, zinc, chitin, fibre, vitamins and minerals.

The fungus also has a long history of use in traditional Chinese medicine to promote good health and vitality and increasing body`s adaptive abilities. It is a highly concentrated food and unsurpassed for flavour in addition to being a completely satisfying meal.

Edible mushroom may be put in various sausages, minced meat and vegetables, soups, pastes and bakery products and many other dietary menus. It can be grown easily anywhere. However, cultivation of edible fungus also consumes agricultural and industrial wastes and produces such as straw and molasses, which is an excellent fertiliser and soil conditioner.

Mushrooms are colourless matter and do not need sunlight to obtain the requisite nutrients for survival. They can grow in darkness. A crop of mushroom can be produced in boxes beneath kitchen sinks and in garden sheds. For large scale cultivation, properly designed rooms/spaces are needed, with suitable temperature, humidity and darkness.

The fungus is fleshy and an umbrella-like fruiting body. It produces microscopic spores, which serve as a mean of reproduction. Its use as a food item is becoming common throughout the world. It also serves as a source of medicine.

Mushroom cultivation in the country is in its teething stage and its pace of development is very slow because of insufficient public and private sector support and awareness of the general public. Its cultivation has a tremendous prospect though, at present only some wild mushrooms are eaten by rural folk. Modern technology has made it possible to grow mushrooms under control and semi-control conditions.

The simple, economical and commercial methodology for cultivation of some known edible mushrooms has been evolved in the country. The varieties of edible mushroom cultivable in the country are Oyster mushroom which is grown in a moderate temperature. Paddy straw mushroom is extensively grown on paddy straw. Button mushroom variety is grown on specially prepared compost. It has distant taste and aroma. Oak tree mushroom is generally grown on wood logs of oak trees. It can also be cultivated on compost material made from sawdust, rice and wheat barn.

The fungus may also be grown in variety of places like, caves, ditches, huts and hovels. Cultivation of mushrooms needs preparation of substrate and compost; preparation of spawn; seeding of the spawn on suitable substrate for mycelium growth and production of fruiting bodies.