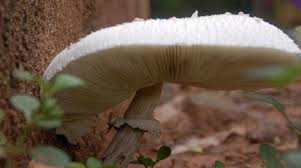 An edible mushroom is a delicacy relished as popular but costly food. In the developed countries, mushrooms have become one of the most important of all the horticultural crops. The production of mushrooms is increasing rapidly throughout the world, which is available all the year round and is used in many kinds of table dishes.

There are about 6,000 different species of which at least 1,290 are reported to the edible. Mushrooms are used as food as well as medicine since time immemorial. The edible variety contains a high percentage of protein, all indispensable amino acids, and vitamins B-complex and other biochemical compounds.

The protein value of mushroom is double that cabbage, potatoes and asparagus four times to that of tomatoes and carrot and six times to that of oranges. Mushrooms are source of niacin (0.4g) and riboflavin (0.4 mg). They serve as a good source of trypsin enzyme, and are rich in iron, copper, calcium, potassium, vitamin D, and folic acid.

They have a long history of use in traditional Chinese medicine to promote good health and vitality and increasing body’s adaptive abilities.

Mushrooms can be grown by almost anyone and anywhere. However, cultivation of this edible fungus also consumes agricultural and industrial wastes and produces such as straw and molasses, which is an excellent fertilizer and soil conditioner.

Mushrooms have no colouring matter and so do not need sunlight to obtain the requisite nutrients for survival. They can grow in darkness where no other crop would easily flourish. A crop of mushroom can be produced in boxes beneath the kitchen sinks and in garden sheds. For large-scale cultivation of mushroom, properly designer rooms/paces are needed, which should provide suitable temperature, humidity and darkness.

Mushrooms are fleshy fungi, which are generally used as delicacy from the time immemorial. It is very tough and an umbrella like fruiting body. It produces microscopic spores, which serve as a means of reproduction, but is not same as that of plant seed.

Mushrooms constitute an ideal source for reducing body weight. Its cultivation in Pakistan is in its teething stage and its pace of development is very slow because of the insufficient public and private sector support. Their cultivation has tremendous potential although, at present time only some wild types are eaten by rural folk, modern technology however, has made it possible to grow them under control and semi-control conditions. Nature has gifted us with variety of environmental conditions suitable for their cultivation from sea level to high mountains, where different types can easily be grown round the year.

A simple and economical methodology for cultivation of some known mushrooms has been evolved. The cultivable varieties are; (i) Oyster mushrooms grown in a moderate temperature; (ii) Paddy straw mushrooms; (iii) Button mushroom, a variety which grows on a specially prepared compost and has a distant taste aroma; (iv) Oak-tree mushroom grown on wood logs of oak tree. It can also be cultivated on compost material made from sawdust, rice and wheat barn.

It has been assumed that the different agriculture and industrial wastes may be used as source of food for mushroom cultivation.

It is commonly grown in areas having natural high humidity and low temperature. These areas are suitable for growing white button mushroom. Chinese mushroom is perhaps the easiest and simplest in its cultural requirements and is more suited to conditions in Pakistan, especially in the plains.

Its cultivation can be profitable as a cottage industry which can be marketed in fresh, canned, dried or made into powder or in a soup conditions. Drying of mushroom is essential for its market from one city to another or for export purposes. Profitable cultivation on a large scale requires closer attention, experience and skill. If it is developed as a cottage industry in villages and on business lines, near towns and cities, the delicacy can become a common diet item to provide cheap source of proteins, vitamins and other nutrients.

A khumbhi mushroom is very common in the rural areas of Sindh, a white umbrella type known as khamiri is also consumed by the local inhabitants of Balochistan, Sindh and the Punjab.

The common edible mushroom (Agricus bisporous) accounts for about 80n percent of the one million ton of mushroom in the world each year, the remainder includes the Japanese forest mushroom. It is necessary to take proper steps to popularize and use of edible mushroom as the items of food and export.