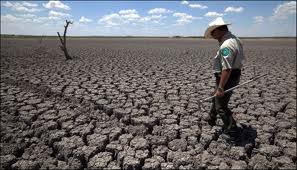 THE severe drought the country is experiencing currently will slow down the growth in the agriculture sector, an economic outlook report, released yesterday by the Bank of Namibia (BoN), revealed.

“Drought conditions being experienced in the country could also impair longer lasting depressed conditions in the primary industries than those assumed under the baseline projections,” the report also noted.

Furthermore, the BoN observed in the report that estimates indicate that most cereal crop farmers are expecting below average harvest in 2013 due to poor rainfall and swarms of worms that are negatively affecting production.

In addition, the report said the effects of drought, which experts believe to be the worst experienced in 14 years, are not only limited to the agriculture sector on the food security but it will have negative spillover to other sectors such as the power generation from the Ruacana hydro-energy power station.

“On the other hand, value added on livestock farming is expected to expand by 23,5% in 2013 before slowing to 6,8% in 2014. The growth in the quantity of livestock marketed in 2013 is due to farmers selling off their livestock in response to the severe drought conditions.

“The rise in the number of cattle and small stock marketing is expected from live weaners and small stock exported to South Africa, as well as livestock slaughtered for export. Sell-offs may decline in 2014, as weather conditions are anticipated to improve next year,” put in the report.

The fishing sector is projected in the report to remain subdued in 2013 as reflected in a reduction in Total Allowable Catches (TAC) and quality of landings and to register a slightly higher growth in 2014. The weak performance expected in 2013 is on account of reduced quotas on one of the main species, hake, coupled with low quality of landings.

“The low uranium prices and the subsequent uranium out-put are expected to contribute to the slowdown in other mining activities,” the report said adding that the economy is expected to grow by 4,7% in 2013, compared to five percent growth in 2012, before expanding by five percent in 2014.

“Fiscal projections reflect a marginal increase of the fiscal deficit included in the latest Medium Term Expenditure Framework, as well as the impact of the recent personal income and non-mining corporate tax reform,” the report concluded.