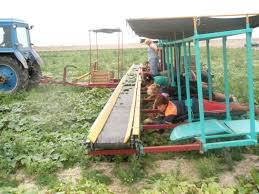 Pakistani and international experts have underscored the need for coordinated efforts to address the problems of farmers, increase crop productivity as well as incomes by encouraging growers to use state-of-the-art machinery meant for lowering the cost of production.

These views were expressed in a meeting attended by Rick Ward, Principal Scientist Global Wheat Program at International Maize and Wheat Improvement Center, Ken Sayre, an expert in crop bed planning and Dr Iqrar Ahmad Khan, Vice Chancellor of University of Agriculture Faisalabad, at UAF on Tuesday.
Ken Sayre said the International Maize and Wheat Improvement Center was promoting the use of multi-crop planters through institutional support in Pakistan to achieve the goal of enhancing productivity and profits of the farmers.
The organisation desires to demonstrate new technology at the UAF for the advantage of farmers and agriculture engineers.
Sayre added his centre was getting support of renowned agronomists, water experts, wheat, maize, cotton and rice experts and was also working with the International Livestock Research Institute to ensure advancement of the agricultural sector.
Rick Ward highlighted that farmers in Brazil, Mexico and some other parts of the world had been using zero tillage beds for planting crops for decades.
However, he said even today, in many countries, farmers had not abandoned old practices and a big challenge for experts and governments would be to change the mindset and push them towards adopting modern practices and tools.
UAF Vice Chancellor Khan spoke about the importance of stepping up coordination among stakeholders to bring down the cost of production through intervention.
Khan stressed that the UAF was making all-out efforts to change the mindset of farmers, asking them not to consider their work as subsistence farming rather make it profitable by using all intelligent tools of enhancing productivity as well as profits.
The UAF, through its outreach campuses across Punjab, is launching a campaign to make agriculture profitable with the help of new ways and means that would enable the farmers to raise their incomes.
News Source
Courtesy Daily Times
Tweet