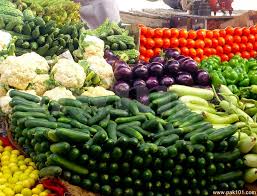 these poor countries grow and consume much more vegetables for their main food requirements.

A rich purple vegetable that absorbs strong flavours well. It grows in Pakistan. Aubergene is uses for different purposes.

Beans – high protien seeds of legume plants .The cluster bean plant, is also known as the guar bean. It is a member of the legume family of vegetables, along with all other types of beans and peas. The guar bean is widely grown in Asia, primarily in the northwestern parts of Pakistan.

Beet – Tubers with rich nutty flavours. A sweet variety of beet is grown commercially in europe and asia and it is cultivated in Pakistan also . It is best known in its numerous cultivated varieties, the most well known of which is probably the red or purple root vegetable known as the beetroot or garden beet.

Broccoli (referring to “the flowering top of a cabbage”). Broccoli is a plant of the Kale family Brassicaceae (formerly Cruciferae). Broccoli has large flower heads, usually green in color, arranged in a tree-like fashion on branches sprouting from a thick, edible stalk. Broccoli is usually boiled or steamed, but may be eaten raw and has become popular as a raw vegetable in hors d’œuvre trays. Boiling reduces the levels of suspected anti-cancer compounds in broccoli, with losses of 20 – 30% after five minutes, 40 – 50% after ten minutes, and 77% after thirty minutes.

The brussels sprout is cultivated for its small, leafy green buds, which are typically 2.5–4 cm (0.98–1.6 in) in diameter and visually resemble miniature cabbages. It grows in Pakistan and it is one of the most useful vegetable in cooking. Brussels sprouts, as with broccoli and other brassicas, contains sulforaphane, a chemical believed to have potent anti-cancer properties. Although boiling reduces the level of the anti-cancer compounds,

Cabbage is a cool season vegetable. The optimum temperature for growth and heading is between 15°C and 20oC. Above 25oC, the growth is arrested. Cabbage the king of vegetables. Easy to grow almost anywhere.It is find in Pakistan.There here has been a progressive increase in area and production of cabbage in Pakistan.

Carrot – Introduced by the Romans, carrots have been popular for 2000 Years.Now carrot is also grows in Pakistan. The Carrot is the second most popular vegetable in the world after the potato. Carrot is an erect (30–120 cm high) The colour of the root in the cultivated varieties ranges from white, yellow, orange, light purple, or deep red to deep violet and black.

Celery Apium graveolens is a plant species in the family Apiaceae commonly known as celery .Slightly bitter (unless blanched) Pakistan stalks with a distinctive flavour, used in salads, stews and soups.Cellery is cultivated in Pakistan also. In temperate countries celery is also grown for its seeds. Actually very small fruit, these “seeds” yield a valuable volatile oil used in the perfume and pharmaceutical industries.

Chard, also known by the common names Swiss chard is a leafy vegetable, and is one of the Pakistan cultivated descendants of the sea beet. Although the leaves are eaten, it is in the same species as beetroot (garden beet), which is usually grown primarily for its edible roots. Swiss chard is high in vitamins A, K and C, with one cup containing 214%,716%, and 53%, respectively, of the recommended daily value. It is also rich in minerals, dietary fiber and protein.

Cucumbers – related to courgettes and traditionally used raw in salads. The cucumber grows quickly and holds lots of water .Cucumbers is one of the most essenetial and daily used vegetable in Pakistan. Cucumbers contain most of the vitamins you need every day, just one cucumber contains Vitamin B1, Vitamin B2, Vitamin B3, Vitamin B5, Vitamin B6, Folic Acid, Vitamin c. Cucumbers are a good source of B Vitamins and Carbohydrates that can provide that quick pick-me-up that can last for hours.

Jerusalem Artichoke – It isn’t an Artichoke and it doesn’t come from Jerusalem.It grows in different areas of Pakistan . The jersalem Artichoke is actually related to the sunflower. The bit we eat is an ugly little tuber (like a small thin potato) that tastes amazing. It has a smoky taste that really excites the palette. Jerusalem artichokes have 650 mg potassium per 1 cup (150g) serving. They are also high in iron, and contain 10-12% of the fiber, niacin, thiamine, phosphorus and copper.

Melons – Wonderful fruits with a high water content. There are many farmed varieties of melon in Pakistan . All have seeds surrounded by rich, watery but sweet flesh that is encased in a fairly hard shell. Watermelon is popularly used as a fruit, to be a sweet enhancer or fun accompaniment to our everyday meals. The watermelon is often cut into bite-sized squares or balled, or very often simply sliced and enjoyed. It’s also used in the types of recipes that are created using fruit and vegetable.

Okra also called ‘ladies fingers’ or gumbo is a wonderful pungent vegetable from the same family as hollyhock. It probably was first cultivated in Ethiopia and is still a North African staple, but has become popular in Europe, Asia and America too.It grows and use for various purpose in Pakistan. The species is an annual or perennial, growing to 2 m tall. The leaves are 10–20 cm long and broad, palmately lobed with 5–7 lobes. The flowers are 4–8 cm diameter, with five white to yellow petals.

Pakistan is blessed with amazing agricultural resources thanks to its fertile land, well-irrigated plains, weather, and farming tradition. Pakistan annually produces about 1.5 million tons of onions, with an increasing trend during the past 6 years. To provide product at the widest range of seasons, we select quality onions grown in the Sindh, Balochistan, and Punjab regions for export around the world.

A potato can provide much of the recommended daily allowance (RDA) of a number of vitamins and minerals.It finds in Pakistan in a huge quantity.Potatoes have 600-800 mg of potassium, which is 40 percent more than a banana.. Some varieties have 40 percent of the RDA of iron. Potatoes are also a great source of vitamins, even supplying vitamin C, the sunshine vitamin. Vitamin C is essential to help maintain healthy connective tissue and heal wounds. Potatoes are also a good source.

Peas – best eated within minutes of picking as the sugars rapidly turn to starch. Therefore frozen peas often taste better than ‘fresh’ peas. Peas are cultivated for the fresh green seeds, tender green pods, dried seeds and foliage . Green peas are eaten cooked as a vegetable, and are marketed fresh, canned, or frozen while ripe dried peas are used whole, split, or made… “Green peas are the number one processed vegetable specifically in UK and USA and Pakistan.

A sadish is the root of a plant related closely to mustard, another surprisingly healthful plant. It’s generally used as a garnish or salad ingredient because of its mild-to-peppery flavor and unique red-and-white coloration, but it’s much more than just a garnish.It grows in Pakistan. Radishes can be added to vegetable juice to spice up the flavor a little. In this form, they can help clear your sinus cavities and soothe your sore throat. The vitamin C in radishes is an antioxidant and anti-inflammator.

Rutabagas are commonly known as table turnips or swedes. It cultivated in Pakistan. They have longer necks; the leaves have more bloom and are bluish in color; and they require about one month longer to develop than turnips. Finns cook swedes in a variety of ways; roasted to be served with meat dishes, as a major flavor enhancer in soups, uncooked and thinly julienned as a side dish or in a salad, baked, or boiled. Swedes use in most dishes that call for any root vegetable.

There are few vegetables that better mark the summer months than the sweet juiciness of a vine-ripened tomato. Although tomatoes are now available year-round, the truly wonderful qualities of tomatoes are the best when they are in season from July through September. It is one of the most important vegetable which grows in Pakistan. Tomatoes have fleshy internal segments filled with slippery seeds surrounded by a watery matrix.

Watercresses (Nasturtium officinale, N. microphyllum; formerly Rorippa nasturtium-aquaticum, R. microphylla) are fast-growing, aquatic or semi-aquatic, perennial plants native from Europe to central Asia, and one of the oldest known leaf vegetables consumed by human beings. These plants are members of the Family Brassicaceae or cabbage family, botanically related to garden cress and mustard — all noteworthy for a peppery, tangy flavour. Watercress contains significant amounts of iron, calcium and folic acid, in addition to vitamins A and C.[3][4] In some regions watercress is regarded as a weed, in other regions as an aquatic vegetable or herb.

Yam is the common name for some species in the genus Dioscorea (family Dioscoreaceae). Yam cultivated in Pakistan provides around 110 calories per 100 grams of product . Yam is high in vitamins C and B6, potassium, manganese and dietary fiber while being low in saturated fat and sodium. A product that is high in potassium and low in sodium is likely to produce a good potassium-sodium balance in the human body, and so protects against osteoporosis and heart disease. Maximum Content Courtesy by Gardeninguide.